For perhaps the first time in human history, more people now die from poor nutrition than a lack of food. According to a study published in The Lancet, a reputable British medical journal, under nourishment is still a major concern, but globally more people will die from issues related to eating unhealthy food. One of the study’s authors said that in as little as 20 years we transitioned to a world where eating poorly is killing more people than not eating enough.
If you read the last edition of Here and There, you’ll know that I like to eat. Because of this, I’m usually surprised when people skip meals, especially if they have a physically demanding job. I’ve worked in a few different industries including the oil patch and one aspect of that industry that surprised me was how many of my co-workers replaced meals with chewing tobacco and energy drinks like Red Bull or Monster.
Bad eating habits aren’t limited to the oil patch, but compared to other industries I’ve worked in it’s the one where poor nutrition was the most widespread. The work environment favours dipping into a can of Copenhagen or chugging an energy drink.
Days start early and often last 10 to 12 hours, maybe more, which leads to fatigue. Working outside, especially in the winter, is tiring. People turn to energy drinks to give them the pep they need to get through the day.
Smoking is prohibited on a lot of worksites and stopping often to sit in the truck and smoke is frowned upon. Chewing tobacco allows you to get your nicotine and do your work at the same time. Nicotine also cuts hunger.
I’m not going to preach about the evils of either product. My goal is to expose the marketing ploys and leave the conclusions up to you.
To learn more about the health-related impacts of energy drinks, I spoke with Anar Jamal a registered dietician with Alberta Health Services.
Jamal said there are a few problems with energy drinks. First of all, they contain a lot of caffeine. One short-term effect of caffeine is that it causes dehydration. Jamal also stressed that energy drinks take the place of healthy fluids like water, milk and real fruit juice. After the initial high there is a crash, or a period of low energy which might make you feel even more tired than before you drank an energy drink. Because caffeine is a mild stimulant, it can become addictive over the long-term and cause insomnia. It can be difficult to get good sleep if you have a lot of caffeine in your blood stream. This leaves you tired the next morning and prompts you to reach for another energy drink.
Some energy drinks claim to contain herbs and vitamins. While it’s true that they do, what the beverage companies don’t tell you is that the excessive amount of sugar and the tremendous amount of caffeine cancel any claimed health benefits.
Don’t forget, beverage companies exist to sell you a product. In order to increase their sales, they’ve cashed in on the health craze. Their marketing people tell you that their product has herbs and vitamins because “healthy” products lure consumers. It would hurt sales if marketers told you their product causes rapid heart beat, insomnia and possibly addiction. (But addiction is great for sales.)
Jamal calls energy drinks empty calories – products that give you energy, but no nutrition at all. They contain few if any of the nutrients your body needs to stay alive. The vitamins they claim to provide aren’t lacking in most people’s diet and are found in non-caffeinated or non-sugar sweetened foods.
In order for people to feel alert and awake, Jamal recommends exercise, about 150 minutes a week, eating well and getting enough sleep.
Loretta Singh is a dental health educator with Cypress Health Region. Part of her job is to share her knowledge about the effects of chewing tobacco. She explained that chew isn’t a safe form of tobacco. Rather, it is scientifically linked to many cancers and suspected of many others. There’s no such thing as safe tobacco. The only difference is the way it enters your body.
Chewing tobacco has been around for a long time. When the public became more aware of the effects of second-smoke, tobacco companies gave chew a new name. It became smokeless tobacco. Marketers told consumers that smokeless tobacco was a good alternative to cigarettes because bystanders wouldn’t be affected by second-hand smoke.
Singh explained that one of the reasons tuberculosis was so pervasive last century is because a lot of people chewed and spread contagion by spitting. Cigarettes were then branded as a healthier alternative. Interestingly, we’re at a similar point today. One form of tobacco is marketed in such a way that it appeals to our health concerns and, in this case, it’s second-hand smoke. “We’ve come full circle,” remarked Singh.
Singh realizes that quitting can be difficult. “It’s a lot of nicotine so it’s not hard to understand why it’s so addictive,” she said. Singh isn’t hard on people who relapse and chew again. She congratulates them because they showed that they were able to stop.
There you have it. Energy drinks and chewing tobacco seem like good solutions. However, behind the clever marketing and less than accurate promises, the reality is that energy drinks are empty calories and that safer tobacco doesn’t exist. Both are examples of products that don’t nourish the body and contribute to the poor nutrition that is so common in the modern world. 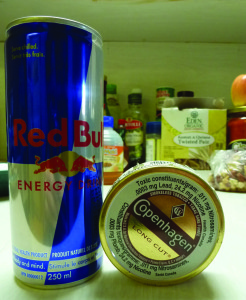