Initiating new hunters to the sport is a meaningful experience

Many of you read hunting magazines to improve as hunters. However, there’s a better way to gain knowledge. It’s by sharing what you already know with rookies and mentoring them on their first hunt. Teaching is the best way to learn.
I’ve taken four people hunting for their first time. All of them had been exposed to hunting in their families, but none had actually hunted. They wanted to try it for themselves and asked me to guide them through the learning process. They may have thought I was teaching them, but in many ways I was the student.
I started showing them the fundamentals of shooting, scent control, spotting and tracking. In the end, all this became a refresher course of what I’d learned over the years. More importantly, it reminded me of what I had forgotten – and it was more than I realized.
I wanted all of the rookies to succeed, but I also needed to let them make their own mistakes so they could learn from firsthand experience. Watching them err reminded me of similar situations I had been through and allowed me to reconsider what I had done wrong.
I try to show rookies the best way to do things, but all I really know is what’s worked for me and what hasn’t. Sometimes we get used to doing things one way, it may not be the best, but we know it gets results. We might get testy when some young pup spontaneously invents a better way of skinning a deer or of loading a moose into a truck. Resist the urge to tell him he’s wrong. The fact is we can’t become better hunters if we don’t learn from others. I never want to become an expert because to me experts are people who think they know it all. I’d never improve with an attitude like that.
Don’t assume you’re an expert or think that a rookie can’t teach you something new. Fresh eyes bring a knowledge all their own. Inexperienced hunters can and will teach you things you would never have thought of.
On the other hand, it’s also important to show new hunters how to behave in an ethical way. There are some aspects of spending time outdoors that I think all new hunters should hear and respect; the first two that come to mind are to not litter and to not drive on the grass. I once saw a young hunter litter and he described my facial expression this way, “You look like someone just killed your cat.” Needless to say, the look on my face was all that was needed to get him to pick up his garbage.
Across most of Saskatchewan, homesteaders ripped up the grass to plant crops. Because so little native prairie remains, I always stress the importance of not driving over what’s left.
Another aspect of hunting I find important is gratitude. I was reminded of this in 2009. In November of that year, a friend of mine from Quebec joined me for a late-season white-tail hunt. Although not new to hunting, he’d never hunted in Saskatchewan before.
My friend was astounded by the number of deer we saw, more in a few days than he sees in an entire season. In Quebec, quality white-tail bucks are rare because there are so many hunters.
Unfortunately, we didn’t see any monsters. However, my friend was impressed by a 3 X 3 we spotted on the second or third day. I wouldn’t even have considered the buck – it was way too small, but compared to most of the deer my friend sees in Quebec it was decent, even pretty good. To him, the deer was a trophy to be proud of. After the successful shot, he took lots of pictures of the young deer and said he truly enjoyed the experience of hunting in Saskatchewan. His enthusiasm reminded me of something I’d taken for granted – Saskatchewan is a world-class destination for white-tail hunting. After all, even our small deer can be considered shooters.
I’ve had the privilege of initiating four rookie hunters. Some of their deer came easy and some didn’t. The deer were the rookies’ trophies, the learning experiences mine.
This is Part Two in a two-part series about hunting. The first instalment appeared in the Nov. 9 edition of the Maple Creek News. 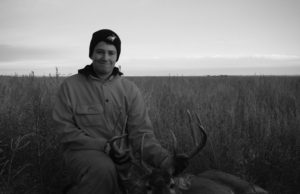