First, denunciate! Then, deprive them of their livelihood for thinking differently than you do. 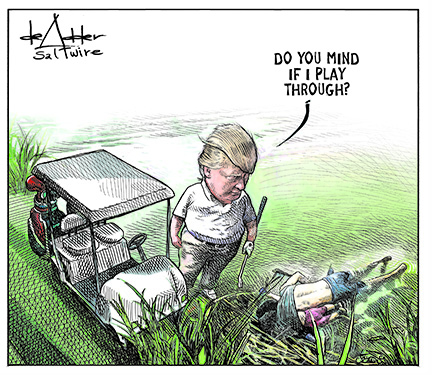 A few months ago, Pipeline News started to carry political cartoons from a new cartoonist, Michael de Adder of Halifax.

I liked his style, his cutting wit and his extremely topical cartoons. We usually carry Malcolm Mayes from Edmonton. Mayes usually has cartoons applicable to an oilpatch newspaper, but not always, so I wanted another option. Thus I reached out to de Adder to see if we could buy his cartoons from time-to-time.

It took a few attempts to get through to him, likely because of what I expect is a daily bombardment of texts, chats, comments, tweets and emails from admirers and demonizers he has to deal with. But eventually we connected, negotiated a price, and have used his pieces twice, to date.

Then on June 26, there was something amiss on his Facebook feed.

He had done a cartoon showing Donald Trump beside his golf car near the reeds of what looks like a water hazard. But lying in the water are the face-down bodies of a man and his tiny little girl. It was an homage to a recent photograph of Óscar Alberto Martínez Ramírez and his daughter, Valeria, who had died trying to cross the Rio Grande into the United States.

Trump asks the dead father and daughter, “Do you mind if I play through?”

It was one of the most hard-hitting political cartoons I’d seen in a long time. And apparently it was the straw that broke the camel’s back. de Adder, who had freelanced for a number of New Brunswick newspapers for 17 years, was cashiered by that group, Brunswick News Inc. (He’s originally from New Brunwswick, too.)

Being in the media, it wasn’t long before his sacking was national news, and rightly so.

Not only had a political cartoonist been turfed due to his satire, I should add it was a Canadian cartoonist, producing work for Canadian newspapers, that was punted for satirizing an American president on an American topic.

On July 24, NBC News posed an opinion piece de Adder wrote about the affair entitled, “My editorial cartoon satirizing Trump and the border crisis went viral. Then I lost my job.”

In it he describes how the company had been making moves to cut him in short order anyhow, but this piece made it immediate.

“Social media thinks I was fired for that cartoon. My former employers have continued to insist it wasn’t. I’ve said repeatedly that cartoon was simply the final nail in the coffin and hastened my demise. The process to replace me was already in the works,” de Adder wrote for NBC.

He goes on, “In my opinion, and given past experiences, I think it’s likely I wasn’t let go for one Trump cartoon. It’s more likely I was let go for all my Trump cartoons. But does this matter? Editorial cartoonists are losing jobs for a host of excuses these days, Donald Trump is just one of these excuses.”

Beyond the fact I’ve used his pieces, this is where the de Adder affair affects me.

When you’ve been writing a weekly opinion column for over 27 years, as I have, eventually you are going to piss off everybody.

What happens when, some day, someone calls for my head, because they didn’t like what I wrote in an opinion piece?

If you think that day isn’t coming, it already has. A few months ago, someone posted a comment on Facebook calling for me to be fired because I write a right wing column, in their words. I was even more astonished when someone I knew, and had even done some photography work for many years ago, agreed.

That sent a shiver down my spine. Who was this person? I have never met them. I didn’t know who they were. But I soon found out that getting into a tangle with them would not be advisable. No good would come of it. I even got an unexpected phone call from someone much smarter than I telling me exactly that.

I soon determined that person seems to be generally mad at the world, and I was simply the person in their sights that day.

But yet here was the implicit threat: in today’s society, if you don’t like someone’s stance on something, or their politics, or, really, anything, you can denounce them. Call for their head! Someone should fire them!

Do these people realize the implications of such calls?

I’m currently working my way through the three volumes of Aleksandr Solzhenitsyn’s The Gulag Archipelago, which tells the story of how the Soviet Union oppressed its people, and their freedoms, through the use of terror, secret police, and prison camps. What strikes me is that this sort of denunciation is precisely what the communists did under Lenin and then Stalin. First, denunciate! Then, take away their jobs. Soon, it’s a rap on the door at 2 a.m., and a train to a camp, if not a bullet behind the ear in the forest. That’s what happened there, for decades, and to millions.

In a manner, they’ve already come for de Adder.

Will they, whomever they may be, come for me, next?

Brian Zinchuk is editor of Pipeline News. He can be reached at brian.zinchuk@sasktel.net.