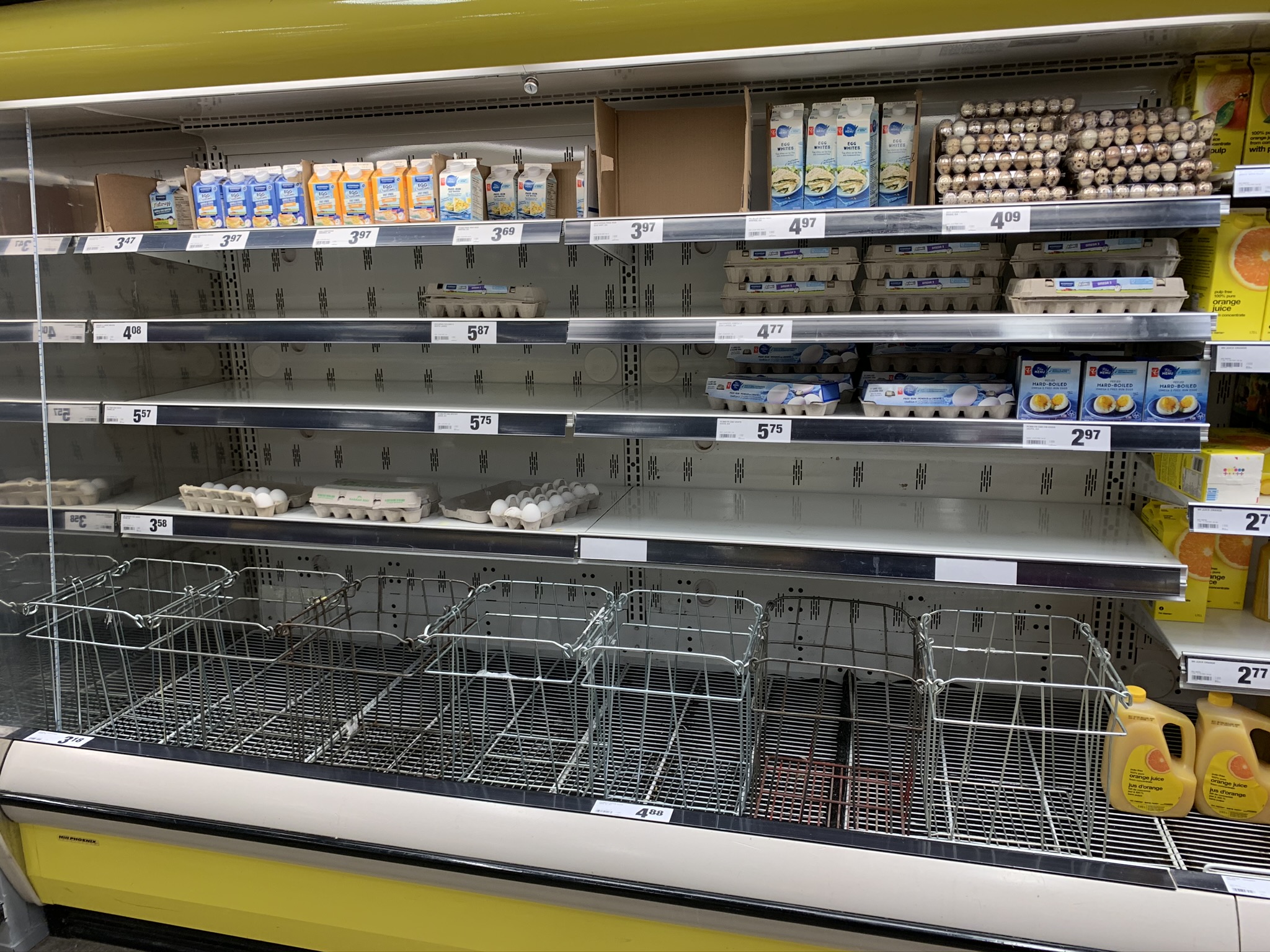 Toilet paper isn’t the only thing that rapidly ran out. This was the egg selection in one store on March, after several days of a mad rush. Potatoes, bananas, large bags of frozen vegetables, rice and flour, and yes, toilet paper, were all in short supply, if not gone entirely.
Send a Letter to The Editor

The stock market crash of 1929 led to the “Dirty Thirties,” which only ended when war was declared in September 1939.

In some ways, this shift is even more earth-shaking. The stock market crash is similar in scale to 1929, but oil is just over half of what it was a month ago, and COVID-19 is shutting down the world.

I am typing this on Sunday, March 15. It’s important to date-stamp, because each day brings more incredible news, each item of which would normally lead the headlines for several days.

This afternoon I told my parents that every school east of Moosomin, Saskatchewan, all the way to the Atlantic Ocean, would be closing. Manitoba will close in a week (although that will likely change before I even post this) will join Ontario, Quebec, New Brunswick and Nova Scotia. Less than an hour after I said that, Alberta Premier Jason Kenney said that province’s schools and daycares would also close, indefinitely. I anticipate Saskatchewan will be next.

Similar things are starting to happen in the U.S., too. And this has been happening all over Europe. Entire countries like Italy and Spain are on lockdown.

Even wartime did not see travel bans between the U.S. and an entire continent. And it certainly didn’t see schools shut down across entire countries.

What happens when kids are simply too young to be left home alone? Does one parent have to stay home now, until September? And what if it’s a single-parent family? Daycares are closing. Do you pray a neighbour will take them in? How does that work if everyone is supposed to stay home, isolated?

If I were to pick one day where this crisis became real for the world, it was Thursday, March 12, 2020.

The night before, the NBA suspended its season. This day, sports, as a concept, as something we do, talk about, care about, ended. President Donald Trump made a national address, shutting down travel with Europe.

It was next to impossible to keep track of the announcements. The NHL, Major League Baseball, PGA golf, the Masters, soccer, are all cancelled or suspended. Hockey Canada soon cancels all hockey, period.

Every convention and conference you can think of was cancelled or postponed within the following 48 hours. Several of the cases in Canada are linked to conventions, although no one really points that out strongly. Prime Minister Justin Trudeau’s wife got it while at a speaking engagement in Britain. He went into isolation.

In the space of a day, entire industries have all but disappeared. Sports – done. Conventions – same. Tourism? Ha! Travel? Forget it.

Restaurants are going to take a beating. Hotels, too. Essentially, the hospitality business will be devastated, and they’re not alone. They’re just the start. I expect 2 million people will lose their jobs in Canada in the next few months. Maybe a lot more.

In the past week Italy, France, Spain, Israel and Saudi Arabia have closed all restaurants and cafes, along with other social venues. What happens to all the people who work in those places? How do they feed their families?

All across Canada, provinces are banning gatherings of more than 250 people. Israel has reduced that to 10.

While groceries, gas stations and pharmacies are generally being kept open, in several of the aforementioned countries, everyone else is to close their doors and stay home.

How will governments be able to support their entire populations, with their economies grinding to a complete halt? Do they just print money? In one fell swoop, will we see the return of a form of communism sweep the globe, where we all, in some way, work for the government because our former jobs disappeared?

As we stagger back to our feet, what, now, is important, and what is not? Food production? Basic goods and necessities? Are we going to hit the reset button 70 years? Did the consumer economy just evaporate, in a week?

I expect some things will need to change, rapidly, as they did during the Second World War. For instance, I’m no chemist, but according to the World Health Organization, ethanol can be used as a hand sanitizer. We have ethanol plants throughout North America currently turning food into gasoline additive. Maybe this ethanol should be diverted to sanitation purposes. After all, with global oil demand falling like a rock, and likely to fall a great deal more, it’s not like there’s a shortage of oil to put in gas tanks.

And if not for sanitizer, maybe it should be used for food. There’s going to be a lot of hungry people if millions get laid off in the coming months.

This is likely the biggest economic shock in 100 years. And we’re just getting started.

Brian Zinchuk is editor of Pipeline News. He can be reached at brian.zinchuk@sasktel.net.