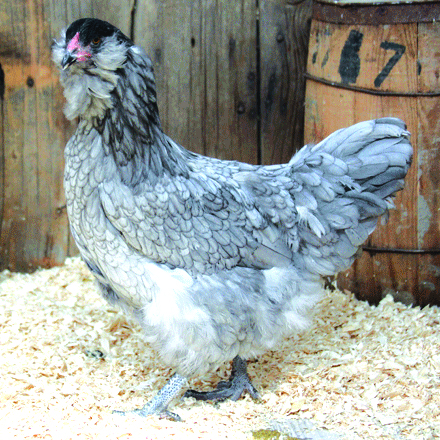 By Marcia Love
It’s not every day someone’s willing to pay thousands of dollars for a pair of chickens. But that’s nothing out of the ordinary during Sandy Bar Ranch’s annual bull sale.
The 37th Annual Short Grass Bull & Female Sale was held at the Aneroid ranch on April 18, and a big part of the sale was its Angry Bird Consortium. The second annual event was held to raise funds for a number of worthwhile causes.
Melvin Moorhead donated a pair of Ameraucana chickens which were the top sellers at the auction, bringing in a total of $12,500.
The entertaining bird sale was dreamed up “under the influence of eggnog” by a group of producers who originally intended to have a pen of show chickens. The idea soon turned into a sale of six pairs of chickens each year during the bull sale, with the proceeds donated to the charity of each buyers’ choice.
“There’s 35 members in it, and every year we select chickens and we have some real rare chickens from all over,” explained Bob Switzer of Sandy Bar Ranch Ltd.
Buyers are represented from across Canada and the United States.
Moorhead’s rooster and hen were first purchased by a young rodeo team from Western Oklahoma State University for $6,500. The chickens – like many others during the sale – were then put back on the auction block and sold again.
One of the charities Moorhead’s feathered friends supported was Aaron & Ed’s Rumble on the Red – an annual rodeo held in Oklahoma in memory of two young cowboys killed in a car accident in 2011.
The Angry Bird Consortium brought in a whopping $43,200 for various charities, including the Southwest Integrated Healthcare Facility. A total of $2,700 was donated to the Southwest Healthcare Trust by 66 Ranch Ltd. at Duchess, Alta.
Other funds were donated to charities such as STARS Ambulance and research into ALS, cancer and blindness.