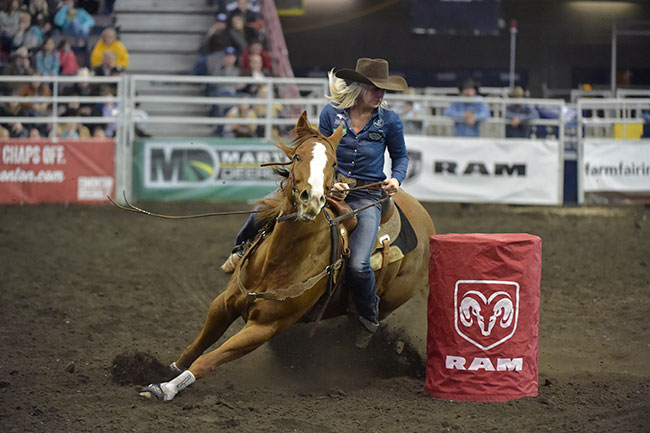 PHOTO MIKE COPEMAN Maple Creek's Colby Gilbert, 21, riding in the ladies barrel race at the Canadian Finals Rodeo in Edmonton, Nov. 9-13. Just a week before the competition her horse passed away. She borrowed two horses, from her mother and friend, in order to compete this year.

Maple Creek had its fair share of competitors at the annual Canadian Finals Rodeo in Edmonton last week, Nov. 9-13.

Three local residents qualified to compete in front of the 95,000-plus in attendance at the CFR, with two others becoming Farmfair champions.

Colby Gilbert, 21, had quite an emotional rodeo. Just one week before the competition her horse Front Street Rodeo passed away. Still wanting to compete, she had to ride horses she was less familiar with. Front Street Rodeo’s spirit was with her the whole way, she said.

“I know he was right there with me so it helped,” Gilbert said. “They mentioned him in a few rounds and almost brought me to tears.”

Gilbert was able to borrow a five-year old horse from her mother and another horse from a friend in order to compete.

“I had so many generous offers,” she said. “I had a crazy amount of people calling saying they would lend me their horses. I think that really shows how strong the rodeo community is.”

It was Gilbert’s first time competing in the ladies barrel race and was named Rookie of the Year. It was an experience she won’t soon forget, she said.

“It was a complete rush,” said Gilbert. “The atmosphere is unlike [something] you’ll ever experience. The fans are amazing, the autograph booth, it’s crazy how many people come for your autograph, you just kind of feel like a celebrity for a week.”

Gilbert wasn’t the only one in her family racing on the weekend. Her mother, Andrea Udal, was the winner of the futurity barrels race.

Another winner with a connection to Maple Creek is Clay Elliott. The grandson of Mary and Bob Elliott is the saddle bronc champion from the CFR.

Maple Creek’s Dale Montgomery was a Farmfair champion, winning both first and second in the stock dog trial. Montgomery has won this event four or five times now, he said. Montgomery used his two border collies Sue and Peg for the first time this year.

“It never gets old to win,” he said. “This year is pretty gratifying because I was kind of in between dogs. The dogs I used to run got old on me.”

The dogs he used to run are now retired from competition.

Another Maple Creek local with a memorable performance was Jared Parsonage. He finished second in bull riding and sixth overall at the rodeo, which was a little disappointing for him because he finished fourth overall last year, he said.

“I probably had higher expectations than [sixth], but  it was a pretty good finals for sure,” he said.

Being able to be one of the few representing his hometown was something Parsonage took pride in, he said.

“It’s a big thing. It’s pretty neat to be able represent [Maple Creek] in the biggest rodeo in Canada,” he said. “Especially with Maple Creek being such a cowboy town, it’s kind of got a deep history with it.”

“I missed it by a little bit,” he said. “It’s always disappointing to come in second, but I was happy to.”

Full results for the Canadian Finals Rodeo can be found at its website at http://www.cfr.ca.