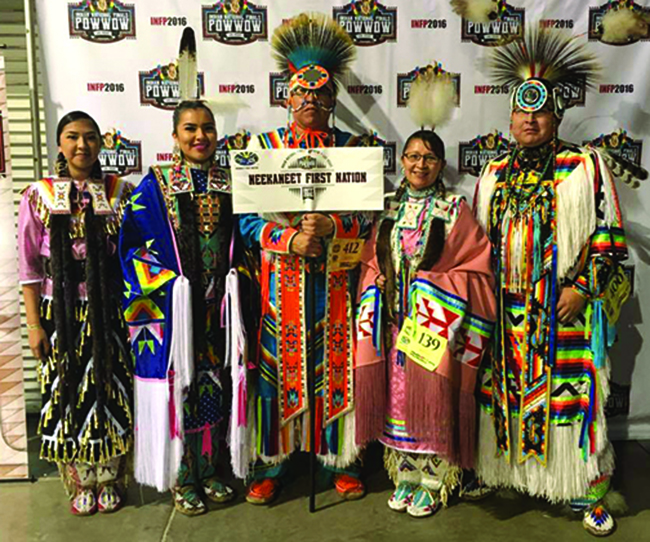 Nekaneet First Nation members had something to be proud of at the first-ever Indian National Finals Pow Wow (INFP) in Las Vegas, NV on Nov. 10 and 11.

Five members of Nekaneet First Nation finished ninth in overall tribe standings at the INFP, with one member becoming a world champion.

Laryn Oakes, 20, was named winner of the women’s Fancy Dance. It was a surreal moment when she was named champ, she said.

“I just started crying,” said Oakes. “I screamed, my mom was standing right behind me and she screamed too, and it was like a really overwhelming feeling. A feeling I’ll never, ever forget.”

“Even just dancing against them was so nerve-wracking,” said Oakes.

There were a few slow-moving minutes leading up to her being named winner. One by one the placed competitors would be named, start with the ninth and ending with first.

On Nov. 10 each American and Canadian tribe entered the Pow Wow, in the Cashman Centre in Las Vegas, carrying signs with flags representing their homes.

“It was cool to see all the different tribes and how many tribe members they had, so it was a really cool sight to see. It reminded me of the Olympics,” Oakes said.

It meant a lot carrying the flag for Nekaneet because her grandfather Gordon Red Bear Oakes designed it, she said.

“We were all so proud,” said Oakes. “It meant so much, being from Nekaneet, and getting to represent my band and my people.”

The band council is proud of the five who competed at the INFP, said Executive Assistant to the Chief and Council Selena Taypotat.

“They all performed really well,” Taypotat said. “It was really nice to see.”

Taypotat, along with a few members of Council, made the trip to Las Vegas to see the 40-plus tribe Pow Wow. When Laryn Oakes was named winner of the Fancy Dance, none of them could hide their excitement.

“We got goosebumps, we were yelling,” she said. “When she got first we were screaming, we were ecstatic.”