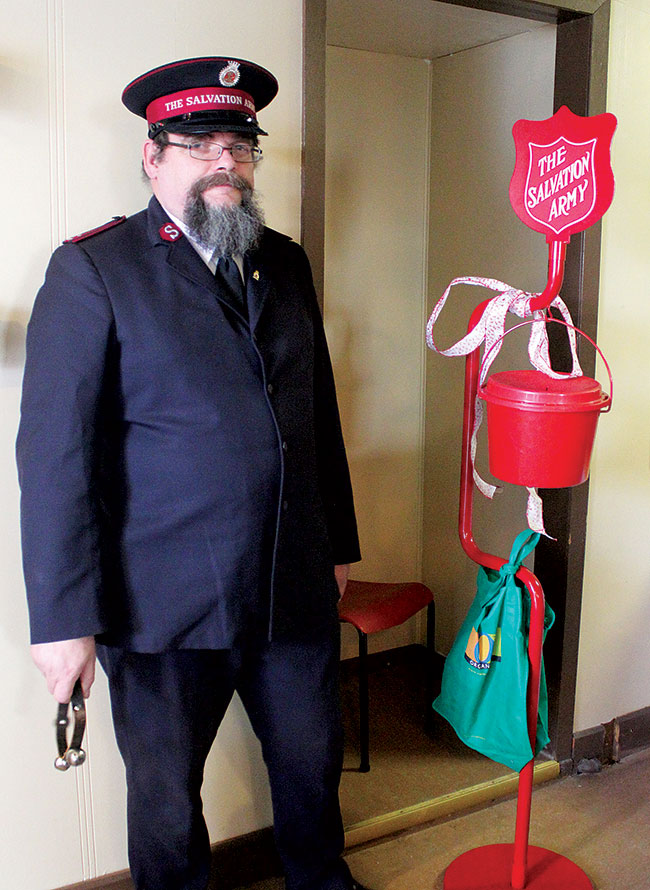 Captain Ed Dean rings the bells in hopes of getting people walking by to donate to The Salvation Army and the food bank at the Piapot Lions Gun and Hobby Show, Nov. 26. NEWS PHOTO MEGAN ROTH

The shelves are looking a little barren at the Maple Creek Food Bank, according to Captain Ed Dean with The Salvation Army.

“We don’t have a lot here at the moment, and that’s a little worrying, especially going into the holidays,” Dean said in a phone interview with the Advance Times.

The items the Food Bank currently has isn’t even enough to fill one hamper for a family in need.

“We could pretty well use just about anything and everything here.”

The past few years have been on the slow side for the Food Bank, however this year has been worse than most. The food drives that took place over the course of the fall did not bring in a large amount, according to Dean. What is being seen at the Food Bank right now is the food coming in goes right back out almost as quickly.

The Maple Creek Food Bank serves people in 10 communities in the Southwest.

While official numbers of families in need in the Southwest are unknown at this time, Dean can confirm the Food Bank does help a large number in the area.

“I don’t know the exact number just now, but I know there are still a lot of people in need out there,” he said.

The food drives that take place in and around Christmas time help the Food Bank to, not only help people during the season, but also to have a little something on the shelves until the following October.

Dean said it is important to know the Food Bank help people all year, not just during the holiday season.

The Food Bank is also not just for a specific group of people, it can help anyone in need at anytime.

“If there is a need, do come and see us,” Dean said explaining families can feel a strain at anytime and that the Food Bank is there to help.

The shelves may be a little more on the bare side than comfort dictates, but Dean is confident they will be filled for the season.

The Food Bank is looking to bring in a lot more food over the next few weeks to fill the shelves and prepare for, not only Christmas, but the time afterwards as well.

The shelves will be filled with the support of Maple Creek and surrounding communities.

Donations to the Maple Creek Food Bank can be made in two ways; either through a food or a monetary donation.

A donation of money is often easier for people, Dean explained. A money donation works well for the Food Bank as well, because they can go to store and just buy what they need.

“I know [the community] will support the Food Bank. They have never let us down before,” said Dean.