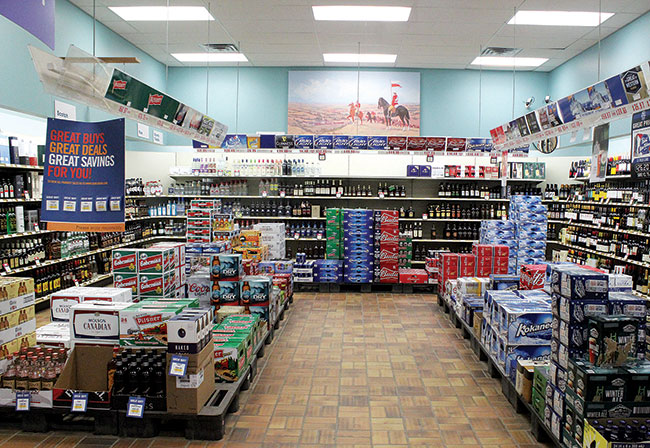 The Maple Creek Liquor Store is one of 39 stores to be sold to a private company due to the Saskatchewan Government's privatization plan. The Maple Creek store was sold to Pioneer Co-op out of Swift Current. Branch division manager Alain De Gagne is confident the new store will have as many or more items in stock as the current store. NEWS PHOTO MEGAN ROTH

Pioneer Co-op is very excited and honoured to be awarded the liquor retail licence for both Maple Creek and Gull Lake.

Branch division manager Alain De Gagne said because Co-op is a locally-minded company, trying for the retail licence was a natural fit.

“We are locally owned and community minded. We are all about being local,” De Gagne explained in a phone interview.

Pioneer Co-op has plenty of retail experience in their senior staff, De Gagne said, and that experience includes management in Maple Creek.

On top of that De Gagne explained Co-op has the right mentality when moving from a publicly-owned company to a private company.

“We are about our members and make our decisions based on them.”

Working for the members of the Co-op and the community was kept in mind when choosing a location, which had to be detailed in the RFP application to the provincial government.

De Gagne confirmed the location of the new liquor store will be connected to the Co-op gas bar, on the corner of Pacific Avenue and Sidney Street.

The details for the new location have yet to be ironed out. However, De Gagne does know a completely new building will be built at the location.

“I know the current gas bar is in major need of repair. This is a solution that will benefit the town and our members,” said De Gagne.

In accordance with the agreement, construction of the new facility must be done within a year of the government announcement, which was on Nov. 23.

De Gagne is confident the construction of a completely new building to house both the liquor store and the gas bar can be completed within the one-year deadline.

“It is my main goal for 2017, to see the completion of the new structure and facility in Maple Creek,” De Gagne said.

The location for the store was chosen for two reasons, the first being the gas bar needed to be redone. The second is because the location itself is ideal. Everyone drives past it, De Gagne said, and everyone sees it.

For those worried about the loss of product to choose from, De Gagne said he believes there is no reason to fear.

“We will match the number of SKUs at the Maple Creek location. Personally I am hoping to see even more.”

The new liquor store will also include a 500-square-foot “beer cave” which will hold a selection of cold beer for customers.

If there is an item a customer would like to see in the store they only have to ask for it to be brought in, according to De Gagne.

“We are member driven and we strive to work for them.”

The pricing of the beverages in stock will also be competitive in the marketplace, De Gagne confirmed.

It is currently unknown how many new jobs the new store will create. De Gagne explained new jobs will be created based on the need of the store.

A benefit of the store is the longer hours, De Gagne said. The store will be  open on Sundays and holidays.

De Gagne said Pioneer Co-op looks at opening the new, private liquor store as an opportunity to provide another service to the community that will be available for the “long run.”

“We are pretty optimistic it will do well.”