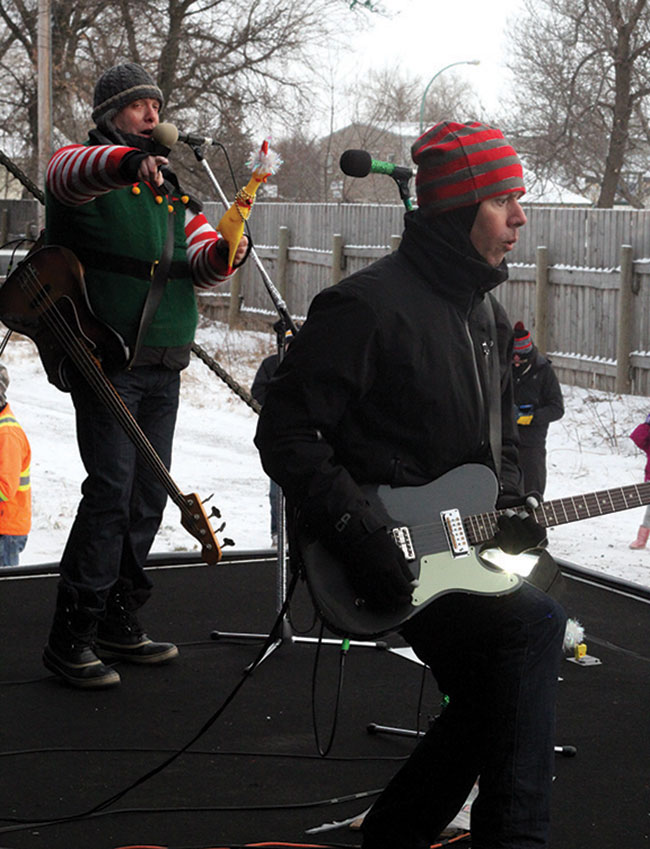 Music, lights and holiday cheer were brought to Maple Creek via rail.

The CP Holiday Train made a stop in town on Dec. 6 as part of its nation-wide trip in an effort to raise money for local food banks.

Dallas Smith and the band Odds performed a 30-minute set for the dozens of people who powered through the -20 C weather.

“It was a great turnout,” Smith told Maple Creek News after the show. “It was good to see lots of kids here.”

All food and money donated at the train go towards  the Maple Creek Food Bank, which is run by The Salvation Army.

Captain Ed Dean with the Army said so far the Food Bank has raised a few hundred pounds of food. There’s more to come to the food bank as there were kettle donations at the train and $5,500 donated by CP Railway.

“It will add up,” said Dean. “This community is very good and we appreciate everything our community does for us and they haven’t failed us yet.”

Seeing the children enjoying the show was the best part for Dean, he said. He also enjoyed the music himself.

“It was a wonderful show, they do a great job each year,” he said.

It’s local food bank workers, like Dean, that are at the heart of the Holiday Train, said CP Rail spokesman Andy Cummings.

“We can bring the train, we can bring the performers, we can put on a show, but it really is these local folks, these volunteers and community food shelf leaders that inspire us,” said Cummings.

The performers were exceptional, added Cummings.

“They’re amazing musicians,” he said. The fact “that we can bring that to a small town in support of a good cause, we’re very proud of it.”

Seeing so many people come out to the train despite the cold weather didn’t surprise Cummings, he said.

“We have folks coming out with their kids in the cold, I know Saskatchewan in the winter people are used to it, but that’s a cold wind.”

Holiday spirit is in full effect when the train is in town, he added.

“What’s bringing people out here is the desire to support their neighbours and to play a positive role in their community because everyone deserves to have a meal at the holidays,” said Cummings.

The Maple Creek Multiple 4-H Club were acknowledged for all its community service work by getting the opportunity to take its picture with Dallas Smith and the Odds after the show.

“It’s huge for us,” said general leader Katherine Bohnet. “It’s something that our club is very proud of, that we give back to our community through helping the food bank and other little things.”

All of the 4-H Club members thoroughly enjoyed the show, she added.

“I thought the show was fantastic,” she said. “At first it was a bit cold, but it was just the right mix of holiday tunes, popular tunes and a bit of comedy. It was just great.”

Some of the comedy included the band being frozen on stage in the middle of a song and trying to remember the lyrics to Christmas songs with the help of a rubber chicken.

The train will continue further west, ending its trip Dec. 17 in Coquitlam, B.C.