Cowtown Christmas a success despite the cold 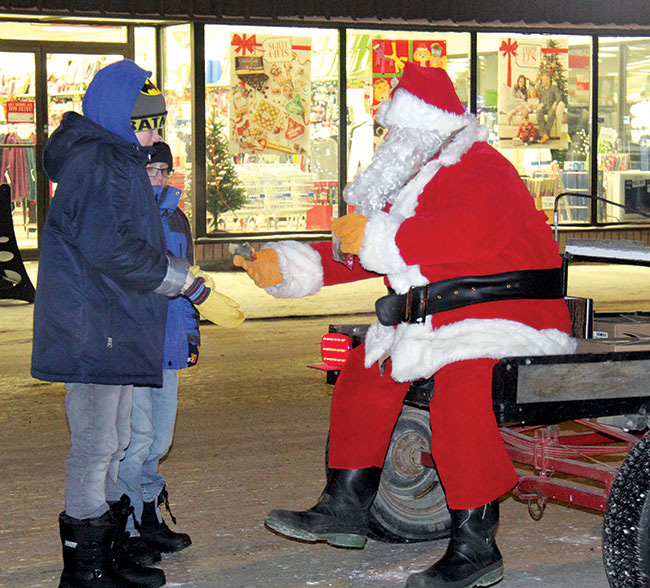 Despite the bitter cold on Dec. 8, Maple Creek residents made their way downtown to take in the sights of Cowtown Christmas.

Bundled up against the cold, event-goers made their way from place to place to experience all Cowtown Christmas had to offer this year.

Blaine Filthaut, president of the Chamber of Commerce, said he was surprised and happy to see many families out for the evening.

“Maple Creek has always been a good place to grow a family. Events like [Cowtown Christmas] are very family oriented,” Filthaut explained.

Royce Pettyjohn, manager of community and economic development and Main Street Program director, said he was very pleased to see “so many out” despite the bitter cold.

“Our preliminary discussions said there was a lot of  traffic through businesses. It suggests to us that the event was a success,” Pettyjohn said.

The cold did keep some people at home and even caused some events to be cancelled. The United Church Carollers, the s’mores with the 4-H Club as well as the fan-favourite hay rides were cancelled.

Both Pettyjohn and Filthaut believe more people would have came out if the hay rides had been running.

“It is what it is,” Filthaut said. “It was cold and we didn’t want to risk anything.”

Though it was too cold to have the hay rides operating, Filthaut did say Eric Lawrence was eager to find another option to provide the ride, but Filthaut said they couldn’t risk it with the way the weather is projected for the next while.

Favourites from the night included what Filthaut called classics, the hot chocolate, fire pits and the hot dogs.

“It’s the things that are consistent throughout the years that are popular, I think. [Thursday] night especially I think people really enjoyed the fire pits.”

If one thing could be changed for the next Cowtown Christmas, Pettyjohn would change the weather. However, he knows that weather is sometimes something you can’t count on.

“Weather always plays a big role in these events. Like with the Heritage Festival in the summer, if it’s pouring, then you are not going to see a good turnout,” Pettyjohn said.

Filthaut is excited to continue the fun into the Night of Lights, Dec. 15.

The night will be full of little events to encourage people to come downtown during late night shopping, which kicked-off with Cowtown Christmas.

“It’s nice that it will work out to be like a back-up for those who weren’t able to come out for Cowtown,” Filthaut said.

“Cowboy Church will be playing in the gallery and the United Church Carollers plan to be out that night because they couldn’t for Cowtown,” Filthaut added.

Night of Lights is expected to continue as planned, Filthaut said, even if the cold persists as meteorologists suggest.

“The most positive part of the night was the demonstration of community pride. That people made the effort to come to the downtown core and do their shopping here in Maple Creek even with the cold,” said Pettyjohn.