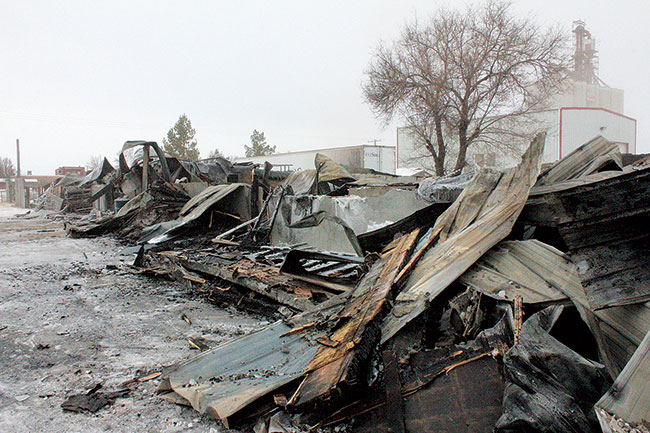 Firefighters responded to a call of a burning building on First Avenue North Dec. 16 at 8 p.m.

When firefighters arrived at the scene, the building was completely engulfed in flames.

Firefighters were on scene from the time the call came in, until after midnight, according to Maple Creek fire chief Keith Stork. Firetrucks did not return to the station until 1 a.m.

The cause of the fire is not known at this time, nor is the exact dollar value of the damage, said Stork. The building was completely destroyed by the fire.

“The building’s down to the ground now,” Stork said.

This is one of the biggest fires the town has seen in a while, Stork added.

“I think the last big structure fire was the laundromat,” in March of 2015, said Stork.

There were no reports of injuries as a result of the fire.

Local construction company, Carl and Terry Stucco, owned the building and used it for storage.

One of company’s owners, Lori Christiansen, said there was a lot of things in the storage building.

It was “mostly work items,” she said. “We had a few people with different things stored out there.”

The building was insured, but they aren’t sure how much the company will cover at this time, Christiansen added.

“We’ll see what the insurance company says. Our plan is to replace it,” she said.

Neighbours and friends have been very kind to Christiansen and the company’s other owners, she said.

“They’re all very supportive,” she said.

It was a windy night on Dec. 16, and the firefighters made sure the fire didn’t spread, said RCMP Sgt. John Phipps.

“When you’re dealing with fire, wind is the fuel,” Phipps said. Firefighters “did a good job at keeping the other buildings safe nearby, which I’m sure the other business-owners are grateful for.”

The investigation is ongoing, he added.

“At this point we don’t believe there’s anything suspicious about the fire,” said Phipps.