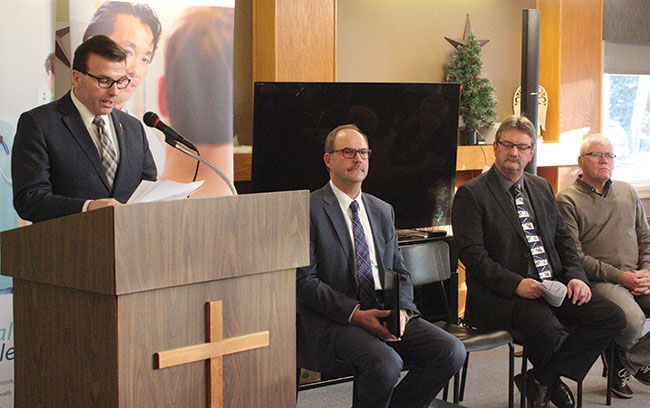 Construction on the new Leader Integrated Health Facility has begun.

Residents, local officials and members of government gathered at the construction site in Leader on Dec. 16 for the official sod turning ceremony.

Buildings like the integrated hospital are crucial in communities like Leader, Rural and Remote Health Minister Greg Ottenbreit said at the cermony.

“It’s a lot better for the patients and the families,” said Ottenbreit. “This is going to be a great addition to the Leader area by integrating these services under one roof. It’ll make everything a lot more efficient and effective.”

It’s been a long time coming to see this building get made. It was special for Ottenbreit to be there for the official groundbreaking, he said.

“It’s very satisfying, probably more for the community than me, but I’m very grateful that I’m able to be here to officially kick this project off,” he said.

According to Reeve of the RM of Happyland Tim Geiger, the project has been discussed for about 15 years.

“We were looking at some of our facilities and they were deteriorating. We did not want to get in a situation where they were not usable anymore,” Geiger said.

The support the municipality has received from the government has been tremendous, Geiger said.

“We went to see them and we explained the situation and they basically came to us with cheque in hand. It was really encouraging,” he said.

The provincial government will contribute 80 per cent, $9.6 million, towards the $12 million, 16-bed project.

Raising the other $2.4 million locally was not difficult at all, according to Geiger.

Also attending the sod turning ceremony was Cypress Hills MLA Doug Steele. It was a proud day for him, he said.

“This is what rural Saskatchewan is all about,” said  Steele. “Working together to accomplish this type of facility in rural areas to support the communities in the long-term is just overwhelming.

Steele praised the provincial government, municipal government, nearby municipalities and local residents that have been pushing for the building over the past few years.

“The people themselves having a vision and working towards this day [makes it] an amazing day to be a part of,” Steele said.

Even though it took a while to get the construction underway, Bev Vachon, CEO for Cypress Hills Health Region, said she never lost hope.

The integration will bring health care services under one roof. The new building will have the acute care beds and emergency department, an ambulance bay, primary health care clinic and the building will attach to Western Senior Citizens Home.

Having all the services in one place will increase efficiency, said Vachon.

“That allows us to actually utilize all of our human resources in a more effective way,” she said.

Being able to spend money on health care rather than the  infrastructure of old buildings is another positive, she added.

In addition to the Integrated Health Facility, the seniors home door will have some renovations done over the next year.

There will be several changes, with the big one being replacing the floors in the building. The government will provide $400,000 for the renovations and the municipality will bring in $200,000. Cypress Hills Health Region will fund money as well.

Construction on Leader’s new Integrated Health Facility is expected to be completed in 18 months.