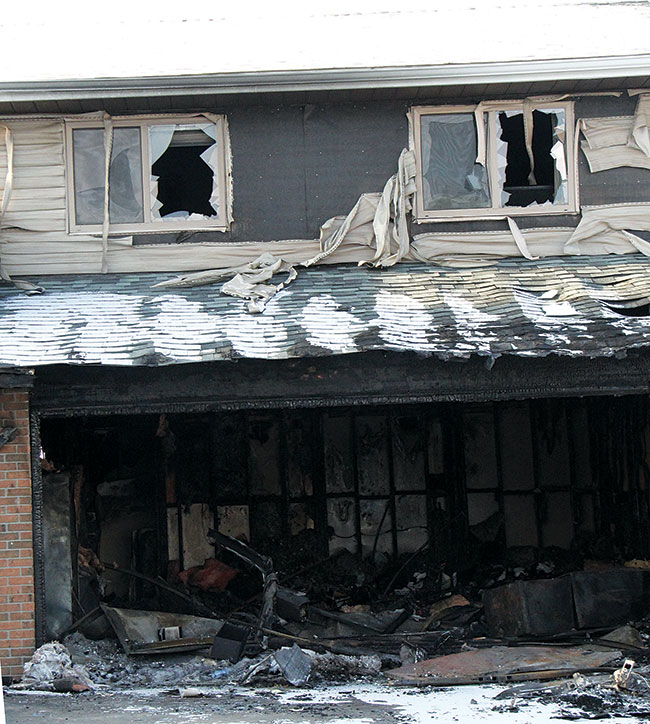 A look inside the garage, where Dec. 25's fire started at Dave and Lori Tryyki's home. NEWS PHOTO MEGAN ROTH

Christmas morning did not go as expected for Lori and Dave Trykki, when a fire started in their garage and soon engulfed their home.

The fire began around 7:30 a.m. Dec. 25, Lori Tryyki said. She says  she remembers getting the turkey ready for Christmas dinner later that day.

It was their SecurTek that first alerted them something was wrong.

“I could smell something, and I had Dave go down to investigate,” said Trykki.

The fire grew quickly, and when she went to assist her husband, Trykki said she could see smoke coming in through the door to the garage.

Dave Trykki tried to put the fire out with a fire extinguisher, but it did nothing to stop the fire, according to Trykki.

“The smoke got really bad, really quick and we had to get out,” she said.

She called it impressive.

Fortunately no one was hurt as a result of the fire, even the family pets, a cat and a dog, were able to make it out relatively unharmed, though their cat,

Becky, had some singed fur and slightly burned paws.

“It was something out of a movie really, this volunteer firefighter coming out of a fire with smoke billowing around him holding the family pet,” Trykki said with a laugh.

What truly amazed her about this harrowing experience was the response from the neighbours and the community.

Captain Ed Dean with The Salvation Army was there before the fire was out offering help and assistance as needed. He also put the Trykkis up at Cobble Creek Lodge.

Employees from Blythman Agencies, where the Trykkis have their insurance through, were on the scene before the fire was put out with assurances they would help.

“I couldn’t believe they were there, it was amazing,” Trykki said tearing up a little.

Their neighbours were also an amazing help, Trykki said. They opened their home to their soot-covered pets and to the 12 firefighters who needed a break from fighting the blaze.

Cobble Creek Lodge also helped out in a tremoundous way, bringing in donations for the family who lost so much.

Karen Southwood with Cobble Creek Lodge says it was natural to have donations come to the hotel for the Trykki’s.

“The day after announcing we were accepting donations we had many people come to drop stuff off,” Southwood said.

Southwood noted this kind of generosity is what Maple Creek is known for.

“People ask what can I do to help, in any way. This is just something they decided they could do to help,” said Southwood.

The donations brought to Cobble Creek for the family included a lot of housewares, some clothing, winter jackets and even personal hygiene items.

“It was just fitting that we do what we could to help,” said Southwood.

The Trykkis have been overwhelmed with the response from the town and said they already have enough furniture for the home they are renting.

“We have been through so much and the town has helped us through it all. I’m so very grateful,” Trykki said.

Cobble Creek Lodge is still accepting donations in the name of the Trykkis, and will do so until they are no longer in need.

The Trykkis are unsure of what their next move will be, but they do plan to either renovate or rebuild on the same location.