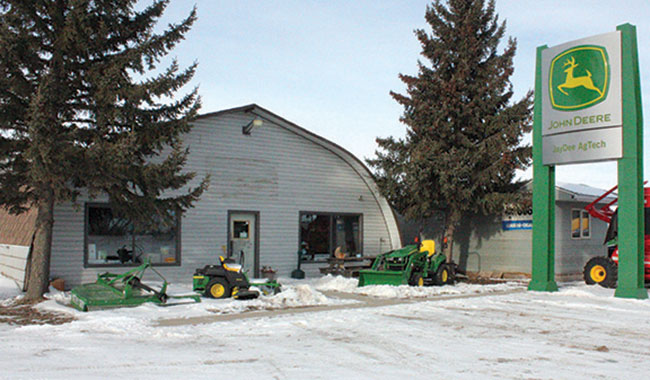 After a merger between Maple Farm Equipment and JayDee AgTech, the company will now be known as Pattison Agriculture. The branch on Hwy. 21 in Maple Creek is already making changes to its building, as the JayDee sign above the door has been taken down. All other JayDee logos will be gone over the next couple months. PHOTO SEAN MCINTOSH

Two agriculture companies have joined forces to become one.

JayDee AgTech and Maple Farm Equipment officially merged to become a combined entity on Jan. 10. The new company is called Pattison Agriculture and will be headquartered out of Swift Current.

This merger has been a long time coming, Group President Darrin Didychuk said.

“It was something we’ve been working on for a couple years and it’s part of our strategy in western Canada to grow our business,” he said.

The Pattison Group was a majority owner in JayDee and Maple Farm prior to the official merger.

No jobs will be lost as a result of the merger, Didychuk added.

“We’re very long-term focused and this will create more jobs as we grow,” said Didychuk.

John Deere is and will continue to be the core brand available at Pattison Agriculture, but there’s a chance the company will look to get more in the future, according to Didychuk.

“We’re looking at what we can do to provide our customers with the tools to do their jobs,” he said.

Locally, the former JayDee AgTech branch on Hwy. 21 is already making the transition to Pattison Agriculture.

“Some of the logos are still out there, but we’re doing our best to get JayDee turned over to Pattison,” said Kale Kuntz, Maple Creek’s branch relationship manager.

The JayDee sign on the building is already down.

Kuntz had been with the Maple Creek JayDee for five years. It’s going to be difficult to say he’s with Pattison rather than JayDee, he said.

Despite that, he’s excited for his future with the new entity.

“Any change that we have will definitely be for the better,” said Kuntz. “We’ll still have that small town feel, but with the deal we’ve got more access to larger amounts of stuff and bigger discounts as we become bigger.”