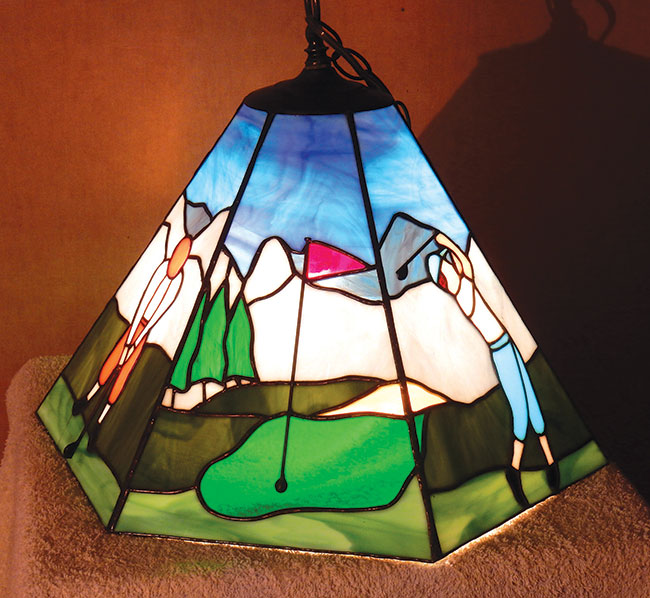 A stained glass lampshade is one of the many golf related items that vendor Paul Lake will be selling at his booth during the Piapot Lions Club's Antique and Collectibles Show and Sale at the Maple Creek Armoury on Jan. 28 and 29. PHOTO PAUL LAKE

One of the biggest Piapot Lions Club events of the year is coming up.

The Lions will be hosting the 18th annual Antique and Collectibles Show and Sale at the Maple Creek Armoury, Jan. 28 and 29.

There will be 80 booths at the show with various items for sale.

A few vendors will be traveling from Edmonton, Regina, Swift Current and Medicine Hat to sell or trade their items.

“Some people make a living off shows like this,” Wasilow said.

Between 700 and 800 people are expected to come to the show, according to Wasilow.

“The money raised every year varies,” he said. “It’s one of our better fundraisers though, that’s for sure.”

It takes a full year of work for Wasilow and the Lions Club to get this event together. Wasilow says he hopes the weather doesn’t affect the weekend.

“Hopefully the weather is good and we have a good turnout,” he said. “If the weather’s nice we get a lot of Alberta people out, so that would be good.”

Wasilow has organized the event for all of the 18 years it has run. There hasn’t been too many changes to the show over those years, but the quality of products available has gotten much better, he said.

“In earlier years there was some real junky stuff that people wouldn’t travel for,” he said.

One of the vendors this year will be Paul Lake. As a first-time vendor at the show, Lake says he’s looking forward to it.

“It’s an excellent opportunity,” he said. “I can sell some stuff, meet the people, introduce myself to the antique industry.”

Lake will be offering various golf-related memorabilia, such as stained glass lampshades and a golf club shaped decanter.

Being a part of an 18-year tradition will make it easier to sell his items, Lake said.

“Because [the show] is so established, that gives the vendors some credibility,” he said.

Peter Hecker, Piapot Lions Club secretary, says there’s one thing he enjoys most about the show.

“Walking down the aisle and seeing the variety of things that people collect and have for sale is my favourite part,” he said.

Seeing his fellow Lions is another part of the show that he enjoys, he added.

“A club function like this always takes all 32 of us to put together,” he said.