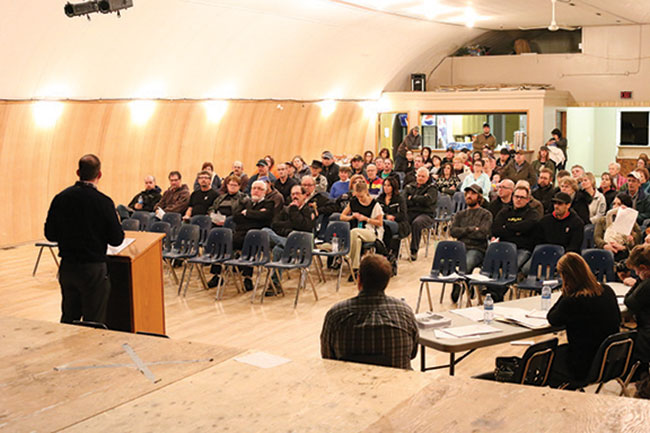 Concerned parents, teachers and citizens gathered together for community meetings in both Maple Creek and Fox Valley to discuss the possible amalgamation of school boards.

School respectively, spoke to an audience of about 20 people about speaking out against the potential amalgamation.

“We don’t have a lot of answers for you. It has all been very quick and very quiet,” said Mthembu.

The amalgamation has four possible outcomes. The suggestion of the six-person panel is to have one school board for the province, four school boards, between eight and 14 school boards, or changing the division boundaries.

Another suggestion is to have a government appointed board rather than a locally elected board.

“They are taking the democracy out of it,” said Williams.

Amalgamation would have problems, as would an appointed board.

Williams explained the loss of a locally elected school board will remove the local perspective at the table and will limit the community involvement in the schools across the province, not just in Maple Creek.

“We can’t be painted with the same stroke as having the same needs as students in the North and Prince Albert,” Williams said.

Both Williams and Mthembu reflected their fear of what could come from an appointed board, like how the Southwest will be affected.

“Who are we to compare with the Saskatoon or Regina? Rural will not see anything if we move to an appointed board,” said Williams.

There has been very little talk of how this amalgamation will affect the rural areas or even how much it will  actually cost.

The board and administration is a very small percent of the overall budget for the school board, according to Mthembu.

“Most of the budget comes from the tax payers in the area,” Mthembu said adding it goes to pay for facility, transportation and instruction.

Principal of Maple Creek Composite School John Campbell said the cost of the board for the whole province is estimated to be only one per cent of the total education budget, that jumps to just over four per cent when adding in the administration.

“This is about control,” said School Board Trustee Kim Pridmore. “It isn’t about saving money, not really. It is about having control over the school boards across the province.”

The Village of Fox Valley hosted its meeting Jan. 19 at the Community Hall with the Leader of the Official Opposition NDP Trent Wotherspoon and nearly 200 members of the public present.

“We have a hall packed here with people that care deeply about education in their school … and are greatly frustrated with a government that hasn’t been honest with them and is looking to take control of the classroom,” Wotherspoon told Maple Creek News following the meeting.

Taking local power of education away and giving it to more urban areas is the wrong path, he added.

“We believe that we must do anything we can do to make sure that the decisions are in the best interests of Fox Valley School. There should be that local impact,” he said.

NDP Critic of Education Carla Beck spoke at the meeting as well. It’s likely the government is already leaning towards amalgamation, she said.

“There are some difficult economic times, but I’m really concerned that we are looking to make up those savings in our classrooms and I think that’s very short-sighted,” said Beck.

For more on the Fox Valley meeting, pick up a copy of Tues., Jan. 24’s Maple Creek News.

The six-person panel that is taking consultations from the public and the schools did not come to Chinook to speak with the school board, said Pridmore.

Maple Creek Mayor Barry Rudd expressed his worry that the amalgamation will be creating a system where the rich get richer and the poor get poorer.

“Are we going to see a system where we will have to send our children to a private school because they won’t get a proper education in the public system?” he asked.

The Canadian education system is meant to be an equal opportunity for everyone to receive an excellent education at the public level, Rudd said.

It was encouraged by Mthembu, Williams and Rudd to send letters, emails and to call Cypress Hills MLA Doug Steele to tell him his constituents are against amalgamation.

Many of those at the meeting signed form sheets to send to the MLA and also took the information to contact his office personally.

“It is time we tell him he was elected to represent us. He needs to keep in mind our needs and not his party’s agenda,” Williams said.