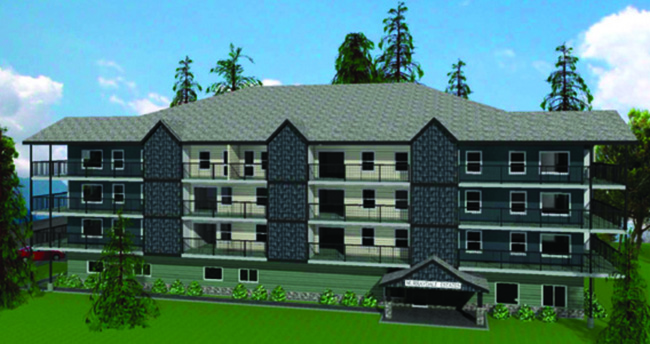 A look at what Murraydale Estates, at the top of Murraydale Crescent, would look like if the build is confirmed by Span West. Condo prices start at $175,000. SUBMITTED PHOTO

Maple Creek could be getting a bit more living space in the near future.

Murraydale Estates will be a four-storey building with 24 two-bedroom suites with balconies overlooking the Maple Creek Golf Club and Cypress Hills.

The condos, located on Fifth Avenue at Murraydale Crescent, are for people 40 years old and up.

The project first came to light when two Maple Creek residents contacted the company and asked them to expand into town after visiting friends and family who live in Span West buildings, according to Span West’s Josh Remai.

The company has optioned the land with the town, but the build is not 100 per cent confirmed yet.

“It’s not a done deal,” Remai said. “We’re going to be looking for people who will commit to us saying, ‘If you build it, we will buy.'”

If 50 per cent of the the condos are pre-sold, the company will “pull the trigger” on the build, Remai added.

“I’m very positive about the whole thing. As long as we get good support from the town and town’s people then there’s no reason the project shouldn’t go ahead,” he said.

If all goes well with condo pre-sales, construction on Murraydale Estates will likely begin in May. The building would take 12 months to complete.

Remai says some people may believe the building quality will be worse in a small town than it would be in a city like Medicine Hat or Calgary. This will definitely not be the case.

“Not only are we intended to build a condo, but we’re intending to build a really high quality, good sound-proof concrete building for Maple Creek,” he said.

Maple Creek is actually not the smallest community  Span West has built in, Remai said. The company has condos in Rosthern, Sask., which has a population of 1,500.

“That was a very successful project,” he said. “The community said they really needed a different style of housing.”

Maple Creek’s Abbott Realty is the Realtor for Murraydale Estates.

“It has the potential to draw people in. Some may reluctantly go to a city to have a condominium type living, but here they can stay and have that lifestyle,” Abbott said.

One big positive with buying one of these condos is the tax incentive. The first four years living in the condo will come with lowered taxes, Abbott explained.

These condos are not being rented, they are being sold, she added.

“There are some regulations in what you can do, but it is yours. If you want to paint it, you can paint,” she said.

Murraydale Crescent could begin to grow after the condo building’s construction, she added.

“I do think the lots [on Murraydale Crescent] will become more appealing,” she said. “I think we will see that crescent fill and in my mind it will be a very nice area.”

She also says the building will be able to house four pets total.

Information meetings for Murraydale Estates will be held in early March at the Glascock Building. The first meeting is on Thurs., March 2 at 7 p.m. and the second is Sun. March 5 at 2 p.m.

If you’re very interested in a condo, don’t wait for those meetings, Abbott said.

“If you want a specific unit, speak up and have it held for you. It is refundable if the project doesn’t go or if you change your mind up until you sign the contract with them,” she said.