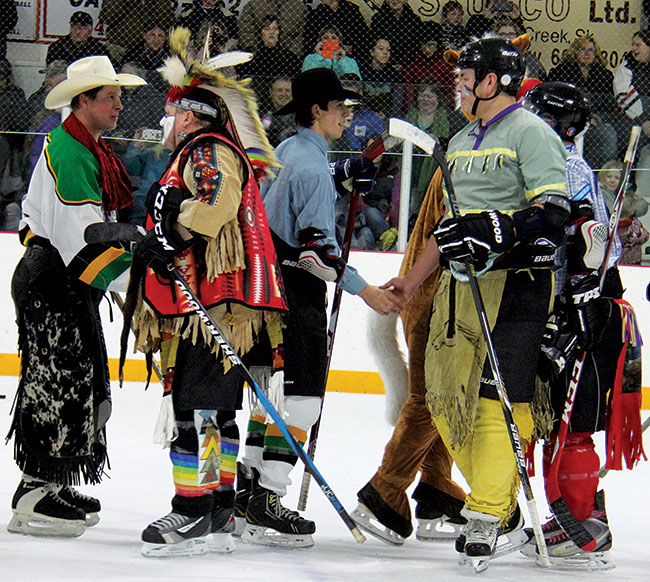 After the final buzzer of Feb. 18's Battle of the Little Big Puck, Cowboys and Indians shook hands and smiled after a great game. NEWS PHOTO MEGAN ROTH

The bragging rights go to the Indians after winning in the 35th year of Battle of the Little Big Puck.

The Indians defeated the Cowboys in a tight game, 9-7.

Strapping on their skates for a friendly game to raise money for the Maple Creek Integrated Healthcare Facility, Nekaneet First Nation and card-carrying cowboys faced each other on Feb. 18 in front of a jam-packed arena.

“It goes back to the original cause which is to have two nations come together,” said event organizer and player Dale Mosquito.

This year the Battle raised $5,593.85 to go towards the hospital. That money will stay in Maple Creek and will not be sent to Cypress Health Region to be distributed.

“We put the money towards something both sides can benefit from not only now, but in the future as well.”

The Battle has been a charity effort for as long as it has been running. The past few years the money raised has gone towards the hospital, something everyone in the area finds need in.

“We give back to the community because that is what Little Big Puck is about.”

Beyond raising money for a worthy cause, the Battle of the Little Big Puck brings together two cultures in a friendly game of Canada’s pass-time, hockey.

After the game, many players signed autographs and took photos with children, which according to Mosquito, just brings the idea of togetherness home.

One player on the Indian team – who was honoured with the most sportsman-like player award – gave his Battle cap over to a fan.

“That speaks volumes. You can’t describe that, you have to image it. And if you can’t image it then you have to come and see us,” Mosquito said.

The game has been going strong for 35 years, with great fan support for the fan-oriented event.

The game has seen three generations of players, sometimes from within the same family.

“Here’s a player who’s granddad was one of the original founding members, and he is skating alongside his dad,” Mosquito explained.

The game has “lineage that runs deep.”

The lineage and being able to see the generations of players makes the game special, Mosquito said.

“It’s shared memories, and they mean a lot to us.”

Because the game has been going for so many years, Mosquito says it can only be imitated.

“No where else will you see this, because of the lineage of the generations of players.

“It can be imitated but very rarely duplicated.”

The Battle has seen some “imitators” or “duplications” with similar events being played in northern Saskatchewan, Mosquito says he would love to go to one of these events to see how they put it on.

“I wish them the best of luck,” he said.

The game is about celebrating the coming together of two cultures, two nations. It isn’t about dividing and focusing on the differences of each player.

In the past there have been people who found the game insulting, but Mosquito says it’s more of a celebration.

The game, Mosquito says, is about bringing people, friends and neighbours together who may not see each other often or at all.

Before the game started and the puck was dropped, the organizers honoured Ed Lasante with a memorial award.

Lasante was one of the original members of the Battle when the event began, back when it was played in the old rink.

“It hits us here as well,” Mosquito said about honouring Lasante, whose son was playing in the game on Feb. 18.

“That’s what honouring was about really, just sitting with a friend.”

Mosquito expects to see the event continue on for a few more years at least.

“When you see two cultures come together, more of that is needed … When we bring communities together it makes our country strong. When you make your country strong it gives the individuals pride in where they are.”

For more photos from the Battle of the Little Big Puck, grab a copy of Thurs., Feb. 23’s Maple Creek News.