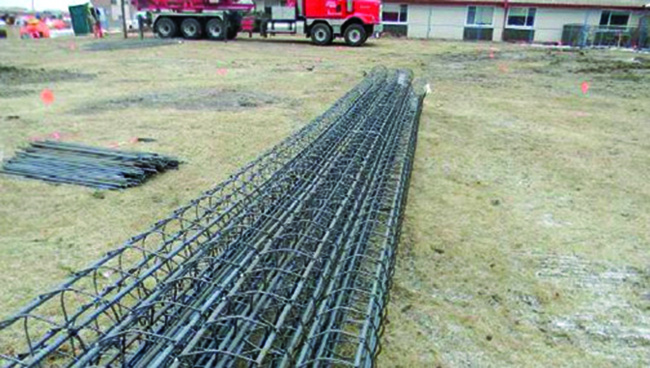 A look at the materials contractors will be using for the next stage of construction for the Leader Integrated Health Facility. SUBMITTED PHOTO

Fences are up and construction is well underway at the new Leader Integrated Health Facility.

Construction on the $12 million project first began in early January with site excavation. This was following the official groundbreaking in late December, which included a visit from Minister responsible for Rural and Remote Health Greg Ottenbreit.

The land, right next to the Western Senior Citizens Home, has been busy with contractors and sub-contractors from Wright Construction Western since the start of the year.

On Jan. 31 the first pilings contractor came to the construction site (pilings are deep holes dug into the ground and filled with concrete to strengthen a building’s foundation).

The piling work for the building is now reaching completion.

With the construction getting off to a good start, a lot of people are sharing their excitement, said capital project lead and vice president of continuing care Brenda Schwan.

“It’s very exciting to be able to move this capital project forward,” she said. “It’s exciting for us as a region, but more exciting for the community and its residents,” Schwan said.

After being able to visit the long-term care centre a few weeks ago, Schwan says its residents are happy to see some action on the site.

“The community has worked long and hard to move this project forward, so they’re excited to see it,” she said.

Grade beam construction is expected to begin soon, according to Schwan.

Grade beam materials already began arriving prior to the pilings’ completion so it could begin as soon as possible.

Rochelle Francis, administrator with the Town of Leader, is happy to see the early stages of the building go well, she said.

“It’s great to see the progress up there,” Francis said. “I know everyone’s curious what’s going on up there and [residents] are excited to see the construction underway for sure.”

The project was 80 per cent funded by the provincial government ($9.6 million), with the local municipalities covering the rest of the cost ($2.4 million).

The Leader Integrated Health Facility was first announced in September 2014.

The new building will house universal care treatment rooms, a therapies suite, acute care inpatient rooms, an isolation room, which will offer a new service to the community that isn’t currently available, an emergency room, a lab/x-ray service centre and EMS.

This is the kind of building that helps communities, said Schwan.

“It’ll reduce a lot of footsteps and transportation, as well as improving communication because all the providers will be under one roof,” she said.

If you’re interested in checking up on the construction of the new facility from time to time, but aren’t in town, you are in luck. An on-site camera will be installed in the near future to capture and archive photos from the construction.

As soon as the camera is installed, you can watch a 24-hour stream of it on the Health Region’s website at http://www.cypresshealth.ca.

The estimated completion of the building is summer of 2018.