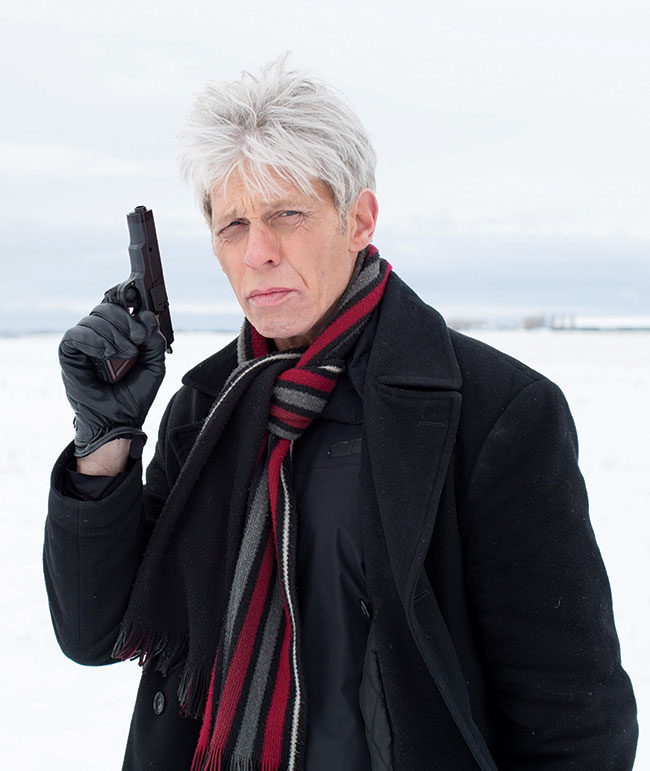 Mackenzie Gray as Jim Dash, a retired international spy hiding out in southwest Saskatchewan, in the potential future web-series "Climax, SK". The trailer for the show can be found online by heading over to Maple Creek News' Facebook page. PHOTO ROBIN MACDONALD

Rural Saskatchewan is the perfect place for a retired international spy on the run – or is it?

The comedic series, written and directed by Evan Godfrey, will be about Jim Dash, a retired, “brazen” international spy, very much in the spirit of James Bond,  who goes into hiding in Climax, Sask., a couple hour southeast of Maple Creek.

“I think Climax is the perfect setting for this idea,” Godfrey said. “I love the character and charm and all these interesting people that live in small towns. Any movie or TV series set in a small town I gravitate towards because they interest me.”

Godfrey says he feels like the twist on a traditional spy story can provide a lot of comedic value.

“I thought it’d be interesting to flip it on its head and make fun of all the tropes that are used for spy characters,” he said.

The trailer for the web-series was released on March 1, but whether the show will actually be made is still undetermined. If the trailer gets enough views, then they will provide producers with details about how the show will be filmed and then it will be decided if the show is a go, according to Godfrey.

“We’re still kind of early on, but the amount of support we’ve gotten, especially from people within Saskatchewan, is amazing,” Godfrey said.

As of publishing, the teaser trailer has roughly 4,200 views on YouTube.

The trailer, which you can find by heading over to the web-series’ Facebook page at http://www.facebook.com/ClimaxSKweb, was filmed in Delta and White Rock, B.C. in just 10 hours.

If the right amount of funding is brought in, scenes will be shot in Climax for the web-series. The goal for the series is to have it live beyond the Internet, Godfrey added.

“Our dream would be that it eventually would become a television show,” he said.

After working on several blockbuster movies, such as the two most recent “Mission Impossible” films and “Deadpool”, Godfrey says “Climax, SK” will have big budget movie talent, with a small budget movie’s efficiency.

“We were able to get feature-level talent on a small budget teaser trailer, so we were able to have the best of both worlds,” he said.

When Godfrey and the producers of the web-series were discussing the possibility of actors for the lead role, Mackenzie Gray’s name came up. Gray has worked on several big budget movies, such as “Man of Steel” and “Shooter”. Currently he has a role on the TV show “Legion” – one of the biggest shows in the world.

Gray says the role of Jim Dash really caught his eye, despite it not being guaranteed to move forward.

“The premise was just so funny,” he said. “I’ve always wanted to play spies … and I just like the comedy [of the character] – an international jet-setting spy stuck in Saskatchewan is funny right away.”

Gray’s family actually has a background in espionage, he said.

“My father was in the British Special Air Service and was a bit of a secret agent,” he said. “The white wig I wear [in the show] makes me look like my dad, so it’s a bit of an homage to my father.”

Some of the other inspirations for the character come from James Bond, “In Like Flint”, other older spy films and the actor Peter O’Toole.

After the one-day shoot for the teaser trailer, he’s looking forward to doing more, he added.

“They had some crazy stuff for me to do all in one day,” Gray said. “They had me on top of a truck hanging upside down beating up a guy. It’s all the same as there would be on a [big budget] show.”

He’s never had the chance to work in Saskatchewan, but he knows it would be an enjoyable experience.

“Corner Gas had the best time shooting in rural Saskatchewan. It’d be a lot of fun,” he said.

It’s hoped “Climax, SK” will film by the end of the year, assuming the funding is provided for the web-series. That would put the release date to roughly a year from now.