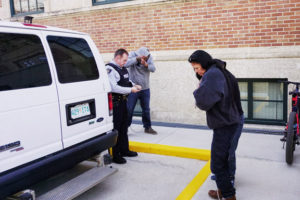 A woman once convicted of second-degree murder, who successfully appealed her conviction and was set free one year ago, has been charged after an alleged stabbing in Maple Creek.

Connie Oakes, 52, along with Ricky Lee Rockthunder, 35, of Nekaneet First Nation, are facing charges after an incident at a residence in Maple Creek on April 5.

A potential male stabbing victim was brought to hospital  in Maple Creek around 7 p.m., according to an RCMP press release.

After speaking with the man, police located and arrested Oakes and Rockthunder.

The connection between the two suspects is not known at this time, according to RCMP Sgt. Earl LeBlanc.

Both Oakes and Rockthunder were charged with aggravated assault, forcible confinement and uttering threats.

It’s unclear whether the alleged stabbing was premeditated, LeBlanc added.

“The details of the events are now before the court so there’s no more information regarding that. I’m not currently aware of any [known motive],” he said.

In 2013 Oakes was found guilty of second-degree murder following the 2011 stabbing death of Casey Armstrong in Medicine Hat.

The decision was overturned in April, 2016 after the sole witness to the crime, Wendy Scott, was deemed to be unreliable due to her testimony’s inconsistency and low cognitive abilities.

Scott, who has an IQ of 50, pleaded guilty to the crime and testified against Oakes. In 2016, there were retrials for both women after Scott retracted her confession and testimony.

Oakes and Rockthunder first appeared in Swift Current Provincial Court on April 10. A bail hearing is scheduled for April 19.