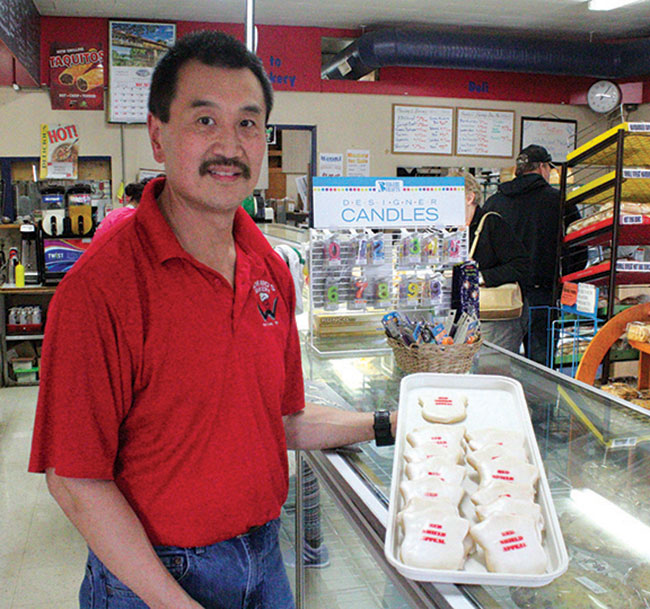 Howard Wong of Howard's Bakery shows the $2 cookies the business will be selling in support of The Salvation Army's Red Shield Campaign, which runs through the month of May. NEWS PHOTO SEAN MCINTOSH

The Salvation Army’s National Red Shield Campaign is underway through the month of May.

Money raised during the month will be going towards The Salvation Army’s social services.

“Our community doesn’t have the same access to resources provided by the government and social services as a larger centre,” said Captain Charlotte Dean.

The $9,000 raised in the last Red Shield Campaign was sent into a national total and the community received about $19,000 from The Army afterwards, Dean said.

The Army “actually more than doubles the total in order to support the work here, so we’re actually supported by other communities that perhaps aren’t in as much need of the money or the social services aspect.”

The campaign raises most of its money through mail-outs. Other Salvation Army locations have their mail-outs done territorially, but Maple Creek’s does everything in-house.

“We choose to do our own because we feel we connect a little better to people in our own area than somebody from Toronto.”

As children both Captains Charlotte and Ed Dean were recipients of The Salvation Army’s social help.

“That plays a large part into why we do what we do,” she said. “I think because we’ve been recipients of that help we’re kind of grateful.”

So many people can be helped by the social services programs at The Salvation Army, said Dean. Some people may be struggling financially or from mental health issues and it’s important they know The Salvation Army is there for them and has the financial support to help them out.

“Sometimes people stop and share their stories about when The Salvation Army helped them, a friend or a family member and when we hear those stories it inspires us to keep going,” Dean said.

“It’s meaningful to see people pitching in and saying, ‘We want to be there and we want to be a part of that,'” she said.

Dean says The Salvation Army does pledge to provide the community with whatever funds are needed, even if the it can’t raise its typical $9,000.

“It’s not a good reason to not give because the reserves deplete really fast if that happen in several communities across the country.”

There’s not too much concern with that for Maple Creek, she added.

“Around here people are pretty good at looking after their own people and I think that’s pretty amazing.”

“We’ll do our best and make the best of our resources as they come back in,” Dean said.

“We like to help out as much as we can. We’ve done this once before and it went pretty well,” owner Howard Wong said.

For more information on The Salvation Army and the campaign you can visit http://www.salvationarmy.ca.