Summer heat could lead to wildfires 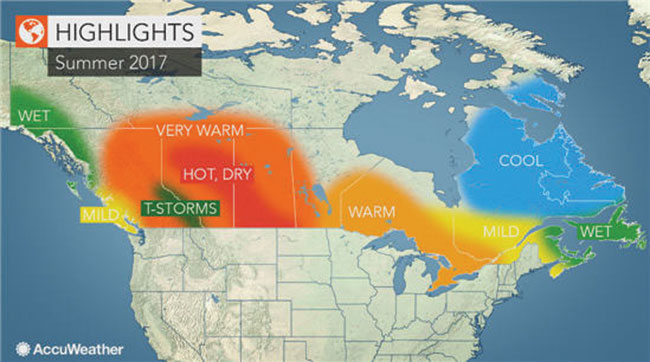 The weather map depicts where will be the hottest during the summer months. Maple Creek and the surrounding area lands right in the middle of what AccuWeather predicts to be quite hot and dry. SUBMITTED PHOTO

It is about to heat up in the Southwest.

The heat the area saw beginning to come through at the end of last week is only a sample of what is to come this summer, according to Brett Anderson, senior meteorologist with AccuWeather.

“We are expecting it to be a hot summer,” said Anderson.

Not only will it be hot but it will also be pretty dry.

This is a trend that will be seen across the Prairies.

Unfortunately, that means an increased risk of wildfires.

However, Anderson believes the greatest risk of wildfires will be in northern Alberta.

“The drought will be more prevalent in northern Alberta than in Saskatchewan because it is already drier up there.”

The fairly wet spring has worked in Saskatchewan’s favour, according to Anderson.

The wet season the province as a whole has experienced will diminish wildfire threats.

“We are expecting a fairly typical season in terms of wildfire,” said Anderson, adding it is still important to keep the threat in mind throughout the summer.

The Southwest is expected to see a “fairly typical” month for May. Anderson says to not expect the dry heat until July.

The heat will last throughout the months of July and August, according to Anderson.

“The heat is going to build and expand over the season. It will largely start in Alberta and grow from there,” said Anderson.

Being in the Southwest, Maple Creek will likely experience a mix of both provinces’ weather systems, though Anderson says they won’t be too different.

There will be some cooler days and interspersed rain, but they are expected to be far between.

It is also expected the Prairies will experience few severe weather movements during the summer months.

“There is going to be a low threat for severe thunderstorms and tornadoes [for the Southwest].”

The weather system coming through for the summer is different than what the region has experience over the past two years.

Anderson says there was a “warm spot” over the ocean which caused the weather on the Prairies to be a little cooler and wetter.

This year the system has turned cool, causing the expected hot and dry summer.

“It’s like a bubble over the area and the cooler movements are bounced away,” said Anderson.

Enjoy the considerably mild weather while you can. Anderson says to prepare for the heat and potentially big wildfire season.