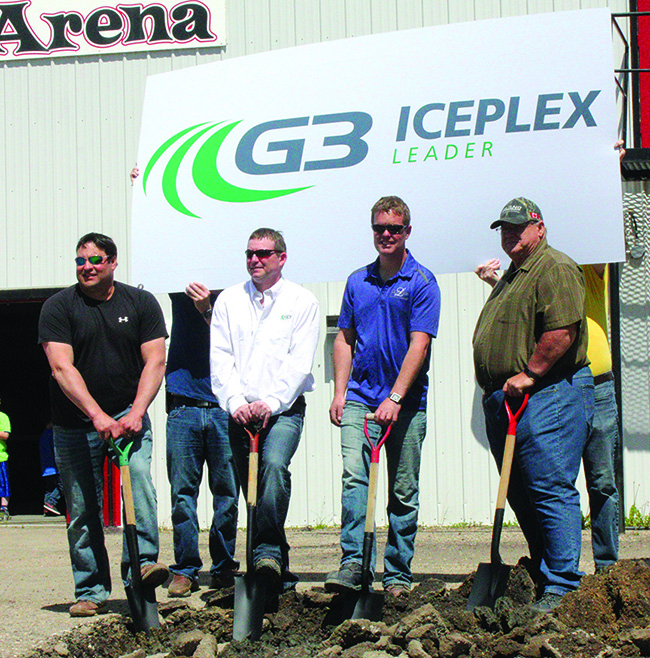 It looks like Leader will be back to curling stones soon.

The official groundbreaking for the new curling rink in Leader was May 19. The new facility will be right next to the hockey rink on Third St. W and Fourth Avenue.

Recently the local company G3 Leader put $100,000 towards the new rink, which earned the company the naming rights for the facility.

“I was born and raised here and this community has meant a lot to me,” said G3 Leader general manager Sheldon Siewert. “To give back to a project to help other people here and in the surrounding area is a good feeling.”

It was announced at the groundbreaking the new facility will be named the G3 Iceplex and will be connected to the hockey rink by a hallway.

Leader’s old curling rink was condemned last year. Briefly after it was condemned, a fundraising committee was created with the goal of raising $1.4 million to build a new rink.

The committee came up with the idea to set perks for people or groups who donated a certain amount. One of the perks was the getting to name the building for a $100,000 sponsorship.

When the committee found out G3 Leader wanted to donate that much, they were ecstatic, according to committee chair Erin Romanuik.

“We couldn’t really believe it,” Romanuik said. “It’s great advertising for them and a chance to give back to the community so it worked out for both of us.”

The community will still need to raise about $900,000, but Romanuik is confident they will be able to do that in time for the curling season.

“We’ll reach it. I have complete faith in our community and everyone around us. We’ll definitely get there,” Romanuik said.

In addition to G3’s donation, the new curling rink has received $400,000 in funds from Leader and its surrounding municipalities. Leader provided $200,000, the RM of Happyland sent $100,000 and the RMs of Chesterfield and Dear Forks provided $50,000 each.

Seeing roughly 40 people come out to the groundbreaking was a great sight, Romanuik added.

“I was happy with the turnout. It reassures us that people are interested, people want it to happen and it’s something we need,” she said.

Also in attendance at the groundbreaking was Coun. Shane Sitter. He says being able to put the shovel into the ground is great after long discussions about building a new rink. It was important to get the rink built this year, he added.

“It’s OK to take one winter off, but after two winters people could start losing interest and we didn’t want to have that,” Sitter said.