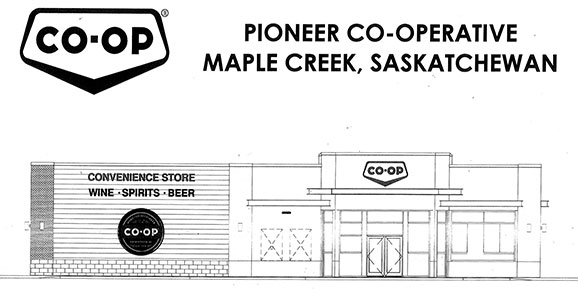 Work has begun on the new Pioneer Co-op Liquor Store and C-Store in Maple Creek.

The process began by bringing down the bulk propane tanks in the northeast corner of the property.

Following this was the removal of the second garage bay connected to the current gas bar.

Branch Division Manager Alain De Gagne says the next stage of the $4.5-million project will be to put in the underground tanks for the new cardlock area.

“The tanks should be going in within the next week or two,” said De Gagne.

Following the tanks for the cardlock going in, De Gagne expects the construction of the building to begin.

He hopes to lay the foundation in the coming weeks.

At the current time, the project is waiting for permits to be signed off before the work can officially begin.

“We are working with the Town of Maple Creek very closely on this, and they have been great. Really helpful,” said De Gagne.

If everything stays on time, De Gagne expects the project to be ready to open by the end of November.

The project has to open by Nov. 23, 2017 as part of the agreement with the Pioneer Co-op and the Government of Saskatchewan when they were awarded the private liquor store licence.

The configuration of the lot will be changed to provide for a new liquor store-convenience store hybrid, gas bar and cardlock.

The cardlock will be moved back to the northeast corner with the store situated next to it in the northwest corner of the property.

The propane tank and filling station will be moved along Pacific Avenue.

“This will make it safer for both our employees and members to fill their propane tanks. They won’t be practically on the highway,” said De Gagne.

The gas bar is planned to be bigger and more accessible now.

There will be four lanes with two pumps each.

“Now we will be able to accommodate four 40-foot truck-and-trailers. Before we could only serve two at a time.”

The store itself is planned to be much bigger and modern.

The liquor store area alone is planned to have more square footage than the current liquor store, according to De Gagne.

De Gagne claims the larger space, including a huge “beer cave”, will hold more SKUs available to the public than what is currently available.

The liquor store will be in a separate area of  the C-Store, with a set of doors to enter through. Though everyone will enter through a main entrance to the store.

“You enter through the C-Store and there will be a another set of doors that lead to the liquor store,” explained De Gagne.

The liquor store area will also have its own cashier, separate from the C-Store.

The convenience store will also be much larger than the current gas bar.

The larger space will allow for more convenience items to be sold including 30-second milkshakes, cappuccinos and hot dogs, according to De Gagne.

The convenience will also have two bathrooms, instead of the one in the current store.

The new store is expected to be modern, clean and energy efficient.

“We are excited to provide this service for Maple Creek and for our members to see the finished project,” said De Gagne.