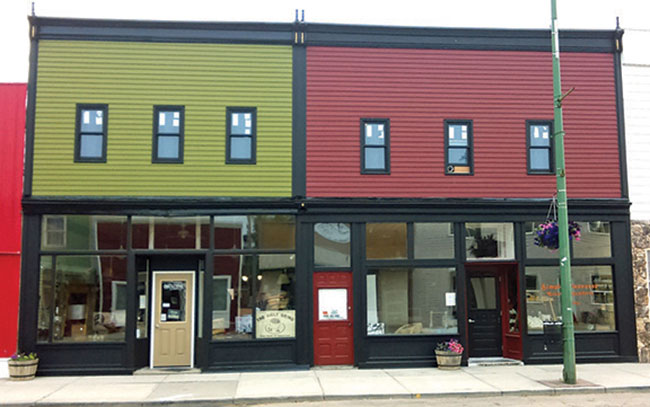 The Rex Cafe building, located at 130 and 132 Jasper St. was selected to receive the Lieutenant Governor of Saskatchewan Award for Architectural Rehabilitation.

The Daily Grind is now located at 130 Jasper St., with Mountain Soul and Cara Lou’s Vintage at 132 Jasper St.

Rehabilitation of the buildings’ facades began in 2014 by owners Tina Cresswell and Dave Turner through participation in the Main Street Saskatchewan program.

Cresswell says winning the award is an incredible honour.

“I started to cry because it was totally unexpected. It was a shock,” Cresswell said.

Architectural restoration is something Cresswell has been around for a long time, she said. Her mother was involved in it, and Cresswell been a part of it for some time as well.

Back in 2006 Cresswell and Turner began the restoration of The Star Cafe and Grill on Pacific Avenue.

“It’s important to understand and honour our roots because if we don’t have roots we can’t have wings,” Cresswell said.

Getting acknowledged for all the hard work Turner and Cresswell have put into Jasper Street buildings means a lot, she said.

“You work all your life in a certain field … and you just do it because it’s a part of you and for someone to recognize that is so gratifying,” she said.

The heritage award was given primarily for the facade rehabilitation, which was completed in 2015 by local contractor Darcy Dietrich of Cypress Ventures Ltd. under the guidance of then Moose Jaw architectural firm Tilbury Design.

There has been a lot of rehabilitation work on the insides of the buildings as well.

Though a lot of work has been done, there is still more to do. Roof rehabilitation work is underway for both buildings.

“We’re just waiting for some logistics and then that will start. Hopefully it won’t rain that much before then,” she said.

Cara Teichroeb, who operates Mountain Soul, is the current owner of 132 Jasper St.

Teichroeb is working to keep the rehabilitation of the building alive just as they did, Cresswell said.

“She’s trying to honour the building as well. She’s doing some work in the back which was much needed and is using some barn wood in keeping with the Town.”

“I think it’s fantastic,” Pettyjohn said. “It’s the highest level of recognition that you can get in the province of Saskatchewan for heritage preservation work.”

It’s rewarding for a local building to receive the award because so much work goes into heritage restoration locally, he added.

“I think it’s certainly fitting that Maple Creek would receive recognition of this magnitude for the work that’s been going on here,” said Pettyjohn.

Cresswell and Turner will receive the award at Government House in Regina on June 14. The award will be presented by Lieutenant Governor Vaughn Solomon Schofield.