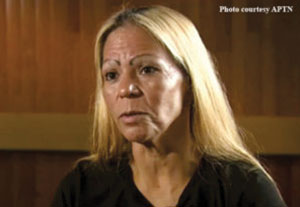 NEWS FILE PHOTO/COURTESY OF APTN. Connie Oakes, who was found guilty of the 2011 second-degree murder of city resident Casey Armstrong, during a jailhouse interview with APTN conducted last fall. Oakes was charged after an alleged stabbing in Maple Creek on April 5.

The sentencing hearing for a Nekaneet First Nation woman has been rescheduled.

Oakes pleaded guilty to charges of aggravated assault, forcible confinement and uttering threats on April 20, after a stabbing incident at a Maple Creek residence in April.

Shortly after the victim was brought to hospital, Oakes and Ricky Rockthunder, also from Nekaneet, were arrested and charged.

Rockthunder will be back in court on June 13 for a bail appeal hearing. He was originally denied bail on April 20, the same day Oakes pleaded guilty.

Oakes is known to the public after being wrongly convicted in 2013 for the stabbing death of Medicine Hat man Casey Armstrong.

She was found not guilty in a re-trial and released in April 2016 – one year before the stabbing incident in Maple Creek.