Two of the families who participated in the Heritage Festival parade held July 22 were represented by three generations. They were part of Cypress Lodge’s entry in the parade, which honoured its residents and thanked them for making Canada great.
Cypress Lodge’s entry included residents George and Fern Yarshenko along with their son Clay, his wife Kristi and their daughter Amelia. Resident Norine Norheim and her great-grandson Cooper Udal were in the parade, too. They were joined by Rose Jarman, who is Cooper Udal’s grandmother, along with his grandfather Shannon Udal and his spouse Lily Briggs.
Jeanie Culligan is the director of care at Cypress Lodge, the personal care home located on Highway 21. She said the residents there deserve to be honoured during the 150th anniversary of Canada because they sacrificed a lot for all of us to have the standard of living we enjoy. Considering the difficulties the residents’ generation endured during the Great Depression or the Second World War, Cypress Lodge felt it was important to recognize the people who made Canada great, Culligan explained. She added our society tends to overlook seniors. Therefore, recognizing them in a parade rights that wrong.
Linda Hanline is Cypress Lodge’s activity co-ordinator. For Hanline, the generation of residents in the care home deserve to be honoured because of their role in building the nation. “They’re our lifeline. They started this country, them and their parents.”
Hanline added that among the Cypress Lodge participants in the parade, eight of them were aged 90 or older.
Fern Yarshenko explained her father homestead near Maple Creek in 1911 after arriving from Whitewood, Sask. Her mother came in 1915. She said her and her parents didn’t see themselves as engaged in building Canada. Instead, they were simply doing the work that needed to be done.
When asked what aspects of Canada she finds great, Fern Yarshenko answered, “The freedom, for one thing. You can do pretty much as you please.”
Shannon Udal drove one of the two floats Cypress Lodge entered in the parade. He used a wagon pulled by his horses Midnight and Jigger. Shannon Udal is part of the Southwest Driving and Harness Club and has been a member since its inception.
Jarman said her grandson Cooper got to help his grandpa with the horses, which is a task the youngster enjoyed because he has an interest in ranch life.
Jarman explained her mother grew up in Alberta, but moved to the Divide area when she got married in the mid 1950s. Her mother moved to the care home shortly after it opened.
When asked what makes Canada great, Jarman answered, “I love the area of Canada we live in. It’s safe and we don’t have to worry about much.”
During her life, she’s witnessed many changes. For example, she lived without electricity or running water until she was 12 years old. That being said, one of the most striking changes she finds is the advance in cell phone technology. “It’s like something out of Star Trek,” she commented.
Jarman lives in Climax and five generations of her family have been involved in their ranch. She’s proud of her family’s traditions and heritage and she’s glad she participated in the parade. “I enjoyed the reaction of the people as we drove by,” she said. “The reactions were great.” Jarman concluded by saying, “I was glad to be a part of it, that’s for sure.” 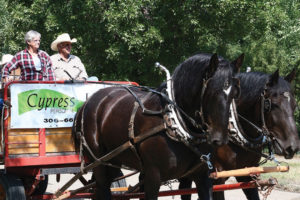 NEWS PHOTO DOMINIQUE LIBOIRON
Shannon Udal and Lily Briggs participate in the Heritage Festival parade July 22. Udal’s horses, Midnight and Jigger, pulled a wagon that was one of two floats Cypress Lodge entered in the parade to honour its residents for making Canada great.