Local chef brings a taste of Maple Creek to Regina

By now, Chef Joel Fitzpatrick is quite the celebrity in town.
He’s one of the many things the Town of Maple Creek has to be proud of. The Star Cafe chef was one of an elite bunch chosen to compete at the Regina Gold Plates early this month, joining seven others for the Oct. 14 competition.
Back in April when he found out he would be competing, Joel spoke with the News-Times about deciding which type of dish to make, whether Italian or Carribean. His choice ultimately was to go Carribean.
“What I decided was that I wanted to bring a little bit of my culture in with whatever I was going to do and a little bit of Canadian too,” Fitzpatrick said. “In the end, I decided to do both. I didn’t want to miss the Canadian aspect of it, so I did the short ribs because, especially in this part of the province, meat is huge.”
Competing chefs were required to incorporate some sort of Saskatchewan spirit into their dishes, whether it be wine, whiskey or beer. Fitzpatrick decided to go with beer, the only chef to do so, choosing Black Bridge Milk Stout from Swift Current.
“Everyone was going to do wine, and I cook a lot with Milk Stout, I just love their beer,” he said. “The judges were quite impressed to see me go that route and see someone who goes outside the wine concept and do something different.”
Fitzpatrick, who trained under Jaimie Oliver, prefers to go more of the rustic path when it comes to his creations. For him, it was drawing from that rustic training and the idea of creating something simple but delicious at the same time that resulted in his well received dish.
He was also one of the few chefs from outside Regina, presenting some challenges in getting things prepared.
“It was a big challenge for us being four hours away, 90 per cent of the chefs were from Regina, so we had the challenge of having to transport enough food and food that would last the four-hour drive to Regina and meet the health and safety regulations,” he said.
Last year’s winner featured a rural Saskatchewan chef and a friend of Fitzpatrick, Garrett “Rusty” Thienes of The Harvest Eatery and Fresh Market in Shaunavon. He won the competition in Regina and moved onto the Canadian Culinary Championships in Kelowna. Thienes was a judge at this year’s competition. That win last year gave Fitzpatrick some inspiration, knowing if someone from a small town did it, it could be done.
“It definitely helped knowing someone from out of Regina won,” he said.”This was a totally new thing for us being part of this competition. We had no clue what we were getting into. The majority of the other chefs were not only from town, but they’ve also done the competition a few times. The one thing that helped for sure was talking to my boss and saying, ‘Well he did it; he won, so we certainly have a chance.'”
Fitzpatrick recalls how busy it was for him that night, being one of the only booths with lines going out the door wanting to try his dish.
“All night it was lined up from out the door, and I guess people were talking about it and telling others they had to try it. Not only did I have all these people I’m cooking for, and a lady comes and says, ‘You have five minutes to set up the judge’s plate.’ I wish I had more time to set up for the judge’s plate, but it was a good learning experience,” he said.
It was a close finish for third place for the Maple Creek chef who just barely lost out to Louise Lu from Skye Café & Bistro. Fitzpatrick looks to focus on his taste and less on the presentation in the future, understanding that his love is to make people be very interested in the flavours he presents.
“What makes me happy is when someone tastes my dish and says ‘woah’ compared to doing this very fancy artistic plate. For me, I want to hear ‘What’s in that sauce man?’ so one thing I came back with is that I want to continue to focus on my flavours,” he said.
It’s been an amazing journey for Fitzpatrick who came out feeling like a winner after receiving such raving feedback at the competition. From where he started to where he is now, he is very proud of his accomplishments.
“Who would have thought coming to Maple Creek, this would of being the result,” he said. “When I was choosing where to come to work in Canada, I knew I didn’t want to work in a big city, and I wanted to do something more small and personal.
“Maple Creek has been really good to me. Since we started the restaurant, we got chosen Food Network Top 10 Restaurants, Business of the Year for all of Saskatchewan, five stars on Trip Advisor, then getting chosen to compete in Regina — it feels great.”
The competition is an annual fundraising event for Canadian Olympic athletes through the Canadian Olympic foundation. 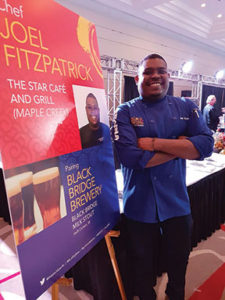 SUBMITTED PHOTOS
Joel Fitzpatrick’s representing the Star Cafe and Grill in Maple Creek. Fitzpatrick was one of the few out-of-towner’s that competed in the Regina competition.