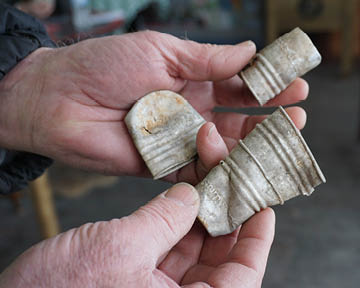 Old shot glasses unearthed in the basement of 208 Jasper Street

Lovers of history will find joy in the titillating mystery that’s being unearthed in the basement of 208 Jasper Street in Maple Creek.

Blaine and Jane Filthaut, owners of the building which houses Broken Spoke Fine Art Gallery, noticed the far east brick wall of the basement had the outline of four windows and even a door. A head-scratching discovery, since the basement is located meters beneath ground level — why would there have been a need for windows and doors?

The Filthaut’s shared their discovery on Facebook and the community answered. Theories were shared which ranged from underground tunnels and coal chutes to a secret space for moonshine or an entry through which horses could enter.

Royce Pettyjohn, Maple Creek main street program coordinator, says while some of the building history can be traced, it’s still unclear what the basement was used for. In regards to the speculation of underground tunnels, Pettyjohn reasons coal chutes as the most likely explanation for why other buildings, such as the Jasper Hotel, have found bricked up basement entrances. “What appears to be a bricked up doorway or tunnel entrance is likely what used to be the coal chute,” says Pettyjohn. However, this doesn’t explain the four windows found at 208 Jasper.

Resources at the S.W. Sask. Oldtimers’ Museum have helped fill in some of the history of this location.

This new Cypress Street building appears in the circa 1918 photo of Maple Creek that has Beaver Lumber in the foreground.

On the fire plan map of 1919 this new building is listed as a furniture store (along with wallpapers, upholstery and picture frames), and shows an addition on the south side of the main building labelled as being the undertaker, which was one of W.F. Lawrence’s many hats.

In Feb. 1922, W.F. Lawrence purchased 208 Jasper Street (which had previously been part of the livery barn property next door — currently Cypress Motors), and in theory had the building on Cypress Street, which is approximately where the Seniors’ Centre stands today, moved by teams of horses to the vacant lot at 208 Jasper. Though there is currently no documentation that confirms the building was moved by horses.

The building then appears on the 1925 fire plan map at 208 Jasper Street, and then again in 1927 in the photo of the Jubilee parade. After 1925, the location on Cypress Street is shown as no longer having a building, and having become the location of a swimming pool. Finally, on the 1931 fire plan map, part of the building at 208 Jasper Street is listed as being used as the Government Liquor Store. Blaine Filthaut’s most recent find of antique shot glasses buried beneath the dirt confirms this, but it’s still uncertain as to why there were so many windows built that far down.

Follow the story as it unfolds on Facebook on the pages of Broken Spoke Fine Art Gallery (@brokenspokeartgallery) and S.W. Sask. Oldtimers’ Museum and Archive (@oldtimersmuseum).