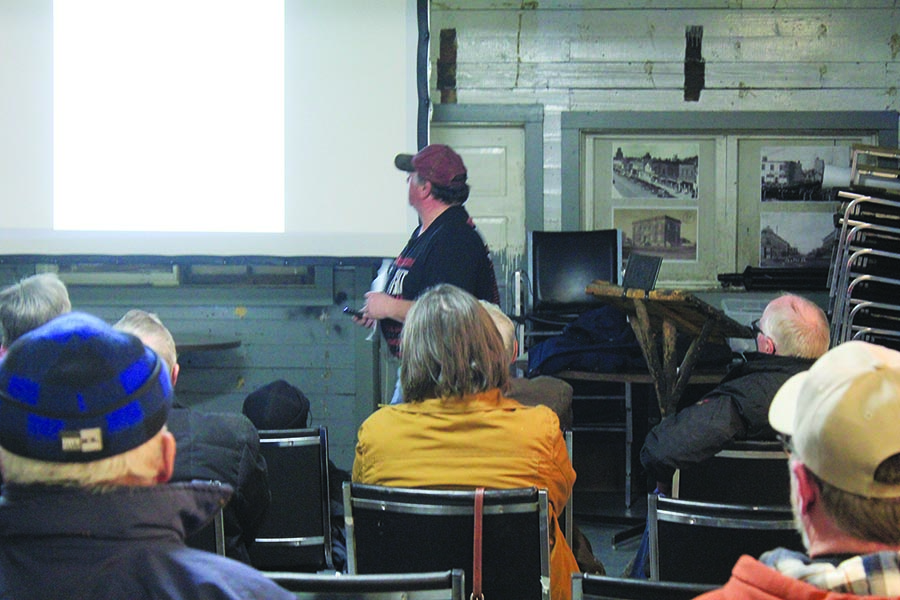 PHOTO MICHAEL JOEL-HANSEN Clay Yarshenko gives a presentation at the CM Glascock Building called The Métis Cowboys on the Western Front, part of a greater Oldtimers' Museum project on the First World War

Around 20 people came out to the CM Glascock Building Feb. 20 to learn more about World War I and specifically some of the people from Maple Creek and area who went overseas to serve King and Country.

The Métis Cowboys on the Western Front presentation is part of the Southwest Saskatchewan Oldtimers’ Museum’s Great War Project. The presentation last Tuesday focused specifically on people of Métis heritage from Maple Creek and the Southwest area who were involved in the war effort.

Royce Pettyjohn sits on the board of directors of the museum. He explained the presentation was part of the museum’s winter public program. Pettyjohn said the project was made possible by a donation made in 2012.

“Richard Guenther gave the donation, he wanted to fund a research project about the Great War,” Pettyjohn said.

After the donation came in two of the museum’s board members, Clay and Kristi Yarshenko, who volunteered to take up the work of researching the project. Clay was on hand Tuesday night to give the presentation, which lasted for about an hour. According to Pettyjohn when the project was originally taken up, staff were not sure about what they would turn up.

“(We) didn’t believe there would be that many people involved,” he said. Once the project got rolling, the research brought to light some surprises that put this original thought to bed quite quickly.

“In excess of 2000 people were involved in the war effort,” Pettyjohn said.

Pettyjohn added that to find out so many people from the area were involved despite Saskatchewan still being a very young province was quite the discovery to make.

“That was quite staggering,” he said.

To find the information the researchers combed through a variety of sources. They were helped along in their effort as the records about the war that are in the national archives in Ottawa have now been opened up to the public, and can be accessed online.

“The Internet helps in the effort,” said Pettyjohn.

The research effort also had the volunteers looking at sources much closer to home, with help from some local organizations. “(They) scoured all local history books, community halls and churches,” he said. The research team also made sure to look at old newspaper articles from the era, which too helped to provide important information from a key primary source.

The project also discovered there were people with links to the southwest who went and fought in the war for different countries, like the United States and France.

The Métis peoples who enlisted from the area served in a variety of roles, with some fighting on the front lines, while others were tasked with digging trenches or cutting timber.

As a result their experiences differed, with some killed in action, while some had trouble staying healthy and as a result spent most of their time in hospital.

Many of them prior to the war worked in the cattle industry, with many listing their occupation as being either ranchers, cowboys, or cow punchers on their enlistment forms. Pettyjohn said the project is going to help the museum going forward in a few ways.

“Through this project we’ve been able to find people who homesteaded briefly,” he said.

Pettyjohn added that by adding more information to its collection, the museum can now help more people who come in find out more about the roots they may have in the area.

“People come to museums looking for information, and it’s disappointing if we can’t provide them with that information,” he said.

The next talk in the information series will be held next month and will focus on the nursing core and the people from the area who took part in that part of the war effort.