Eastend rebrand paying off in spades 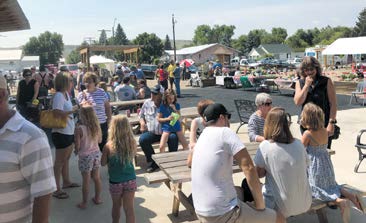 Whether they take home the award or not, the people of Eastend are already winners.

Having recently been named as a finalist for one of the categories of the 2017 Saskatchewan Tourism Awards of Excellence, the town of 503’s latest recognition is simply cherry on the sundae for one heck of a past year.

It’s been not a lot longer than that since the town launched a rebranding campaign called Discover a Sanctuary for all your Senses… Discover Eastend, and in that time the folks behind it all have seen name of Eastend reach all over the globe.

“Little by little our name is going out there,” says Rosa Vasquez-Ring, Eastend’s director of tourism and economic development, who along with her husband and the town’s chamber of commerce developed the campaign. “Not only here, but as people are hearing about us outside the province and the country now.

“And now we are very excited that Tourism Saskatchewan is recognizing us.”

Throughout the past year, Discover Eastend generated tens of thousands of dollars in free local, national and international radio, television and online exposure for the town. It was the kind of exposure you can only dream of, Vazquez-Ring says.

“Being featured on CTV’s The Social program on national television, with recommendations by National Geographic, and ranking among the world’s top 20 most interesting global destinations for Canadians on MSN.com travel, gives the town the kind of promotional exposure you just can’t buy.”

And now on top of all that, the town has been named a finalist for the Gil Carduner Marketing Award. Finalists and award recipients will be honoured at the 29th annual Saskatchewan Tourism Awards of Excellence Gala, the highlight of the HOST Saskatchewan Conference, to be celebrated April 12 at the Delta Hotels by Marriott Regina. The HOST conference is the province’s largest assembly of tourism representatives.

Vazquez says the town’s brochure — which has been distributed all across Western Canada, northern Montana and even Central Mexico — helps people understand what they can see, what they can touch, what they can taste and what they will feel when they visit Eastend. It involves the visitor right from the beginning, intriguing them over what they may encounter upon arrival.

A website followed, and kept in perfect sync with what the brochure was starting to accomplish. From there the entire campaign has exploded, with Eastend receiving accolades and recognition from all angles.

“We have one message,” Vazquez-Ring says. “All our printing, all our advertising, everything is done the same way. It looks like a package.”

The goal has been to become one of the province’s must-see communities for visitors, and no matter what happens at the gala in Regina, that has clearly been accomplished already. And as Vazquez-Ring made a point of mentioning, the size of the town is not what matters most. What matters most is the heart of those who live there.

“We don’t have all the resources (of larger communities) but one thing that works really well here is we have amazing volunteers,” Vazquez says. “They are the ones that make things happen, working alongside with the town.

“It takes the whole community coming together so we can achieve these types of things.”