Battle of the Little Big Puck 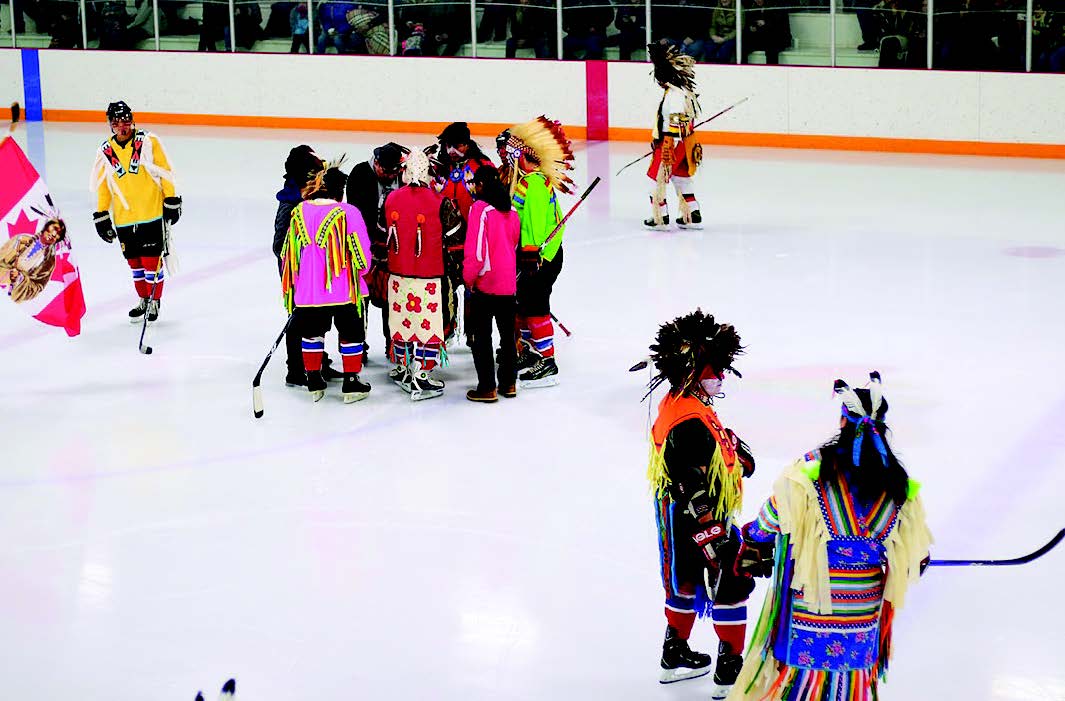 SUBMITTED PHOTOS Members of the community don traditions garbs for the 36th annual Battle of the Little Big Puck. The group comes together each year to raise money for worthy causes.

36-YEAR TRADITION CONTINUES, AS ANNUAL GAME RAISES MORE THAN $5K FOR SOUTHWEST HEALTHCARE AND ATHLETES OF THE NEKANEET FIRST NATION

Organizers are pleased with how the 36th annual Battle of the Little Big Puck turned out. Joe Braniff was the organizer for the cowboy team for this year’s game. Bran­iff said this year’s game went well.

“We were very happy with how things went off,” he said.

The game raised a total of $5,356.90, which will go to the Southwest Health Care trust and to support athletics on the Nekaneet First Nation.

The amount raised was just $300 short of the event’s all-time high.

Braniff said this year’s game was somewhat dif­ferent than in past years as the province is in the midst of some political turmoil over race rela­tions. He explained that this year’s game going off without any issues sends a strong message.

“(It) Shows we have to have faith in people on both sides,” he said.

Along with this mes­sage, Braniff said the Bat­tle of the Little Big Puck teaches another valuable lesson.

“(The game) can be held up as representative of how to work together,” he said.

Braniff added that many of the players who take part in the game have relationships, which also help to make the game a special occasion.

“The relationships be­tween some of the players go back generations,” he said.

He added the game is successful in large part because it is part of the town of Maple Creek and has a rich history on top of it.

“In some places it would not be considered politically correct, but people are OK with it,” he said.

For this year’s game organizers made sure to take time out to honour two people who helped to get the game going originally.

Both Tom Reardon and Nick Demchenko were on hand at the game and were presented with jackets to thank them for their involvement over the years. Despite the honour, Reardon doesn’t want people to see him in a special light when it comes to the game.

“I don’t want any cred­it for starting it,” he said.

When remembering how the game first came about Reardon tells the story of how he was sitting in a bar with some friends 39 years ago in July when the idea came to them.

“We planned it all out and that winter we did it,” he said.

At the time he ex­plained that they did not expect the event to take off and become what it has over the past three decades.

“All we were doing was planning a fun after­noon,” he said.

He added that the game is special, as to play on the cowboy team, somebody needs to be a member of a recog­nized rodeo association, while to play on the team Nekaneet players need to be members of the band and have a treaty card.

“It’s not the ranching community, it’s cow­boys,” he said.

He doesn’t believe that other communities would be able to duplicate the Battle of the Little Big Puck.

“It won’t work any­where else, Maple Creek is a special place,” he said.

The tradition is one that Reardon does not see going away anytime soon as it has become entrenched in the com­munity over the years.

“They’re never going to run out of people to play in it … kids look forward to it,” he said.