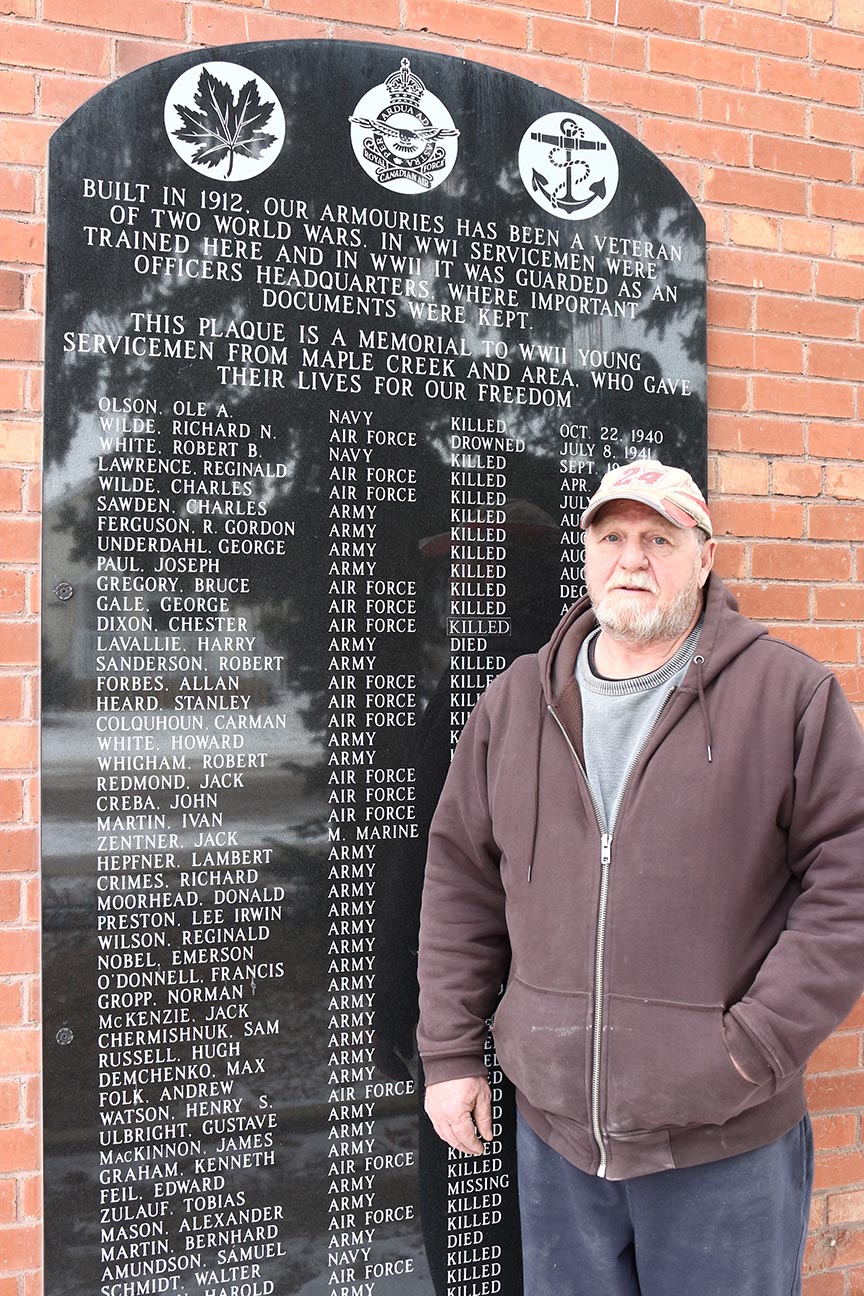 SUBMITTED PHOTO Neil Roy is the project manager in charge of renovating the Armoury’s kitchen. He said the building honours the memory of Maple Creek’s veterans. The names of the servicemen who died in WWII are listed on this stone plaque near the Armoury’s entrance.

A heritage building in Maple Creek is getting an upgrade. The kitchen at the Armoury is currently undergoing a complete renovation. The improvement is part of a larger project to revitalize the historic building and extend its service life.

Originally built to train soldiers during the First World War, the Armoury has served as a community hall for decades and hosted countless events, but the last improvements to the kitchen were done approximately 50 years ago. Since then, kitchens have become more modern and health regulations have changed.

I spoke with Neil Roy about the renovation. He’s the project manager. Roy explained the $120,000 renovation began early in December of 2017. Once the work is complete, the kitchen will feature new commercial duty appliances along with improved electrical and plumbing as well as new flooring, lighting, sinks, ceiling and stainless steel prep areas. The project is expected to end later this month.

To date, two new commercial gas stoves have been installed. There’s a new cooler also and a commercial dishwasher that completes a cycle in under five minutes.

The previous kitchen was stripped down to the bricks. This allowed for all the old plumbing to be removed and the drains were increased from two inches in diameter to three inches.

The electrical received a complete facelift. In the past, the kitchen was plagued by a lack of plug-ins. Because of this, what plug-ins there were would get overloaded. This led to blown breakers, a common problem at the Armoury. To avoid this trouble, people would run extension cords across the floor from other parts of the building, but that wasn’t practical and increased the trip hazard. Now, the kitchen has its own dedicated electrical panel, three phase power and substantially more plug-ins. Blown breakers are a thing of the past.

The next step in the renovation is to complete the finishing carpentry and for Roy this is the part he enjoys most.

Roy explained 16 local tradesmen have contributed to the project. “These guys are all-stars, believe me,” Roy said of his crew. According to Roy, the renovation not only created jobs for the local economy it also showcased “what this generation of tradesmen can do.” Roy is confident to say, “We have a lot of talent in Maple Creek.”

Many of the tradesmen have a connection to the building, Roy said, since such a large number of community events have been held there over the years. Because of this, the men involved in the renovation care about the project and have memories of the historic building. “The Armoury means a lot to a lot of people,” the project manager shared.

For Roy, the Armoury honours the memory of Maple Creek’s veterans, especially the ones who didn’t come home. As a fifth generation resident, he’s proud to be part of a historic project on this 100 year old building.

As with any project, there have been challenges. Roy said the cold weather in December added a degree of difficulty. As project manager, one challenge he faced was creating a schedule during the holiday season that would accommodate his sub-contractors’ availability. The schedule also had to take into account events booked at the Armoury. By communicating with all parties, Roy was able to overcome this situation. “You need very good communication for a very good renovation,” Roy shared.

Maple Creek’s mayor, Barry Rudd, is pleased with the kitchen’s renovation, “It’s wonderful. It’s something that needed to be done years ago.”

The mayor explained the renovation brought the Armoury’s kitchen in compliance with both the provincial health standards and the guidelines established for restaurants. Therefore, the building is better equipped to host events.

The Maple Creek mayor said he’s quite proud all the renovations were done by local contractors, “which is great because they all do excellent work,” he added.

The kitchen renovation is part of an on-going project that began two years ago when a new heating and air conditioning system was installed. This summer, the Armoury got a new roof while in the fall all five windows on the façade were replaced. Not only are the new windows more energy efficient, but their beige frame matches the façade’s stone trim and allows them to blend seamlessly with the building’s architecture. The modern windows maintain the look of the original 1914 design.

In terms of the rest of the project, Mayor Rudd said one possibility for next year would be to improve the bar to make it more user-friendly for large events. A moveable stage might be installed in four to five years, the mayor added.

Once all the renovations are complete, Mayor Rudd hopes the work will extend the Armoury’s life another 100 years.