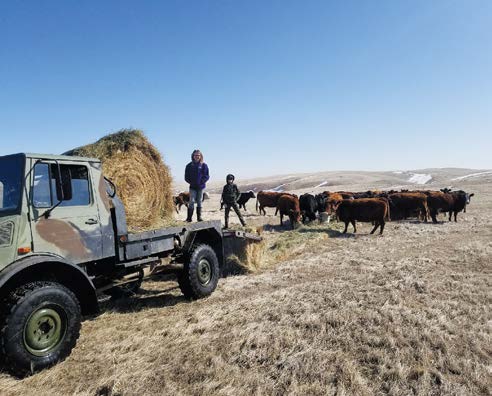 A Maple Creek area ranch is down one cow after an attack by a cougar late last month.

Jenn Widmer and her husband ranch 18 miles from Maple Creek. The attack on one of their cows took place three miles from their home. The cow killed in the attack was a five-year-old, which Widmer said makes the incident all the more concerning.

“That’s why it’s so scary, they usually go after the young and old,” she said.

The loss of the young cow was made worse for the family by fact the cow was pregnant at the time.

She said her and her husband do have insurance, but explained ranchers are paid only what the current market rate is for the lost cow, not the actual value.

Widmer said they were confident the attack was carried out by a cougar, as the cow that was killed was attacked at its neck. She added the suspicions they had were confirmed when others came out to look at the dead animal.

“(The) insurance people came out, said it was a very large cougar,” she said.

The rancher said they generally have problem with coyotes preying on their herd, but this is the first time they have lost an animal to a cougar. This year Widmer said she has heard of other people seeing cougars in the area, with some coming quite close to people’s homes.

Right now, she said her and her husband are keeping their eyes open for the cougar that killed their cow.

“The insurance people said they come back in a week,” she said.

The family has two Rottweilers on their property, which helps to keep the animals away from their home. When it comes to protecting their livestock, the Widmer’s, like many other ranchers, have limited tools at their disposal. One of the only options they have is to try and eliminate the cougar if it comes back again.

“We’re going to kill what we find,” she said.

For its part, the Government of Saskatchewan makes a number of recommendations on how to deal with the big cats on a fact sheet available online.

Among the advice the government gives to people living in areas where there may be cougars present is to avoid feeding pets outside as the scent of the food may attract a cougar. Also, feeding other wildlife is discouraged as it could attract cougars. The government says there are also steps residents can take to make sure their properties are not as appealing to cougars.

This includes removing dense vegetation and enclosing spaces under decks and porches while keeping outbuildings closed, as cougars are always looking for places to den or cache food.

Kevin Harrison, a conservation officer with the Ministry of Environment, stressed how important it is for people to be aware when they are in an area where they may be, and if attacked, you need to be aggressive.

“If you are attacked, fight back with everything you’ve got,” he said.

Harrison added ranchers or farmers who shoot a cougar or any animal to protect their property need to make sure to inform the proper authorities after.

“They can shoot an animal to protect their property, and they have to notify us when they dissipate an animal,” he said.

Harrison encouraged anyone who has any concerns about wildlife to contact the SaskTip Line at 1-800-667-7561.