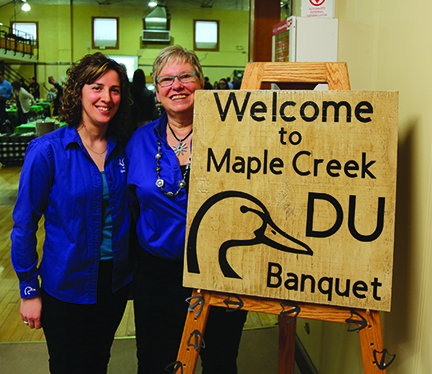 The Maple Creek Ducks Unlimited Committee put on its 33rd annual banquet Saturday night at the Maple Creek Armoury. The event serves as a chance for the group to fundraise and also to honour people who have served as volunteers with the organization over the years.

Lena Blakley serves as the treasurer of the of the Ducks Unlimited committee in Maple Creek. She explained the money raised at the banquet helps the groups efforts in the province.

“It’s a fundraiser for Ducks Unlimited Canada, but the funds stay in Saskatchewan,” she said.

Ducks have been quite active in the Maple Creek area with a variety of projects. According to the group, throughout its history in Maple Creek, which stretches back to the late 1970s, they have established 84 projects in a 100-kilometre radius. These projects have secured over 30,000 acres of land for conservation. Overall Ducks Unlimited has invested over $8 million in the area with over $600,000 of that coming from the group in Maple Creek.

“It’s cool to see we’ve raised quite a bit for a small community,” Lena said.

The group was happy with the attendance at the event this year, as they had sold 142 tickets, which was up from the previous year. The committee didn’t have a set fundraising goal for this year’s banquet, but they were hoping they would exceed what they raised last year. Besides dinner, which was catered by The Shop Bakery and Deli, the event featured six different stations where people could play different games.

“We have what we call the passport,” Lena said.

Once people bought their passports, they could go from station to station and play games ranging from a ring toss game, where participants aim to throw a ring onto a set of deer antlers, to one which involved darts. People who were successful at a station would get a ticket which they could then enter into a draw to win prizes. Besides the games, there were also silent auction items, which ranged from paintings to a fishing reel. There was a live auction where banquet goers were invited to bid on items ranging from a luggage set to a fishing storage cabinet.

The local committee also had plans to raffle off a print of a wolf to raise money for Ducks Unlimited. But the tragic events involving the Humboldt Broncos and the collision involving the team’s bus, which killed 15 people north of Saskatoon on Friday changed these plans. The master of ceremonies for the evening was Alan Smith. Speaking to those assembled for the banquet Smith explained his history with the Saskatchewan Junior Hockey League (SJHL) and how the recent tragedy had affected him.

“My attachment to the SJHL stretches back to 1989 when I first stepped on the ice as an official. My last game occurred in 2014,” he said.

Smith’s connections to the province’s junior A league didn’t end there as his father too served as an on-ice official.

The master of ceremonies took time to pay respect to the first responders including the volunteer firefighters who were called to the scene to help the victims of the collision. He remarked how hard it must be for those who witness such carnage, and the effects it has on them in their lives.

“We have three volunteer firefighters with us in this room who we hope never have to see that,” he said.

The tickets for the raffle were $10 each and right after Smith announced the committees plans to donate all the funds to the Broncos hockey club over $1,000 worth of tickets were entered. The generosity of that attendance towards Humboldt didn’t stop there. Posting on Facebook, Smith spoke about how during the live auction after buying a set of luggage a man came up to the front of the room and donated the luggage back. He then invited others in the room to follow his lead by bidding for the re-donated luggage, with all the funds raised to be donated to the Humboldt Broncos organization. After all, was said and done a total of $6,555 was raised. Along with the money, Ducks as well decided to send the actual luggage to the Broncos, with the cheque inside. Writing on Facebook Smith expressed his gratitude.

“Thank you Maple Creek,” he wrote.

Raising funds was not the only aim of the night. As the local committee used the night to honour three people who have served in volunteer capacities for 10, 15 and 20 years respectably. One of the people honoured was the Ducks Unlimited Maple Creek committee president Jamie Blakley, Lena’s husband, who was acknowledged for 15 years of service. Jamie said he was honoured to be part of the organization and was happy to help it do its work.

The current president has a long history with the organization in Maple Creek as both of his parents served on the committee.

“My father was on the founding committee,” he said.

His involvement with the annual banquet also stretches back quite some time, where he started helping out by setting up tables and setting out chairs.

“I probably started coming when I was eight or nine,” he said.

Along with Jamie, Judy Empey was recognized for ten years of service. She said she was honoured to be recognized for her volunteer work with the organization. Empey initially got involved with the group through her husband. She felt Ducks Unlimited does important work in raising money for conservation efforts.

“(Its) unbelievable its already been ten years,” she said.

Along with Empey and Jamie Blakley, Lavada Arnold was honoured for 20 years of service to the organization. However, Arnold was not able to attend the banquet Saturday night.