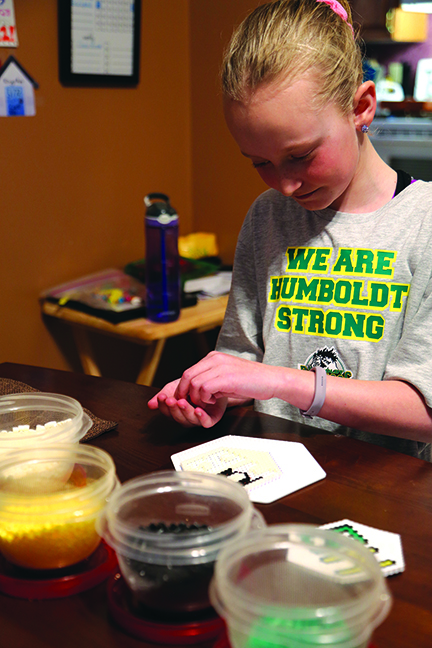 People everywhere continue to find unique ways to pay tribute to the victims of the Humboldt Broncos.

Ten-year-old Jayne Service from Gull Lake found out about the horrific accident from her parents a few hours after it happened. The Service family watched the vigil that was held on Sunday, April 8th and when Jayne saw her Dad tear up for the very first time, she felt the need to raise money to donate and support those involved.

To honour and support the Humboldt Broncos, Jayne started making Perler Bead ‘HB’ symbols that can be used as coasters or decorations.

Perler beads are small, heat activated beads that you lay on a mat to create interesting patterns. After you apply heat, the beads fuse together creating a design. Jayne has been doing the craft for almost two years.

“I was thinking of selling random ones that I made. I had a big huge one, but then Mom made a smaller one, and I thought that would be better because it uses less beads,” Jayne explained.

Jayne decided that she would sell her design for $5 each and had set a goal of raising 100 dollars.

Jayne’s Mom, Rhonda posted on her Facebook page a photo of her coaster along with an explanation of what her intentions were. It became apparent that Jayne would have no problem reaching her goal.

“My phone exploded that night, Rhonda said. People started telling us that they wanted two and four and five.”

Jayne is optimistic that she will have all of her orders completed by mid-May if she can keep up her pace of two coasters per day. She came up with an idea to put dots where the different colours are to save time.

Along with the coaster orders, people have been calling and leaving messages saying that they will donate on behalf of Jayne. Her friends and teachers are also supportive of her venture.

“Lots of my teachers have come up to me and told me good job. Mrs. Munt even asked if she could put me on the school’s Facebook page. I’ll be all over the web!” Jayne laughs.

Rhonda is quite proud of her daughter and says that the accident serves as a good life lesson.

“It’s a freak accident. It could happen to any one of us. Colin (Jayne’s Dad) played SJHL for one season with the Battleford Stars when he was younger. He rode a lot of busses. It really hits home.”