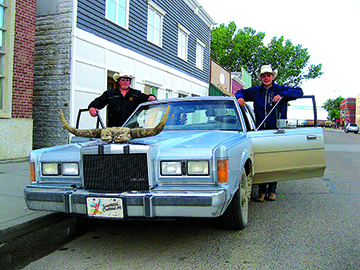 BY MAGDALENA RANDAL
It was like a  scene out of a movie. On the final Friday night of this School year, two young cowboys drove into Maple Creek in a 1989 Lincoln Town Car named Shelly. Decked out with Bull horns, the car caught this reporter’s eye when it was parked in front of the Jasper Hotel. But it wasn’t Brad Pitt or Ryan Gosling who were starring in the evening’s story, it was two young men from Consul in town to celebrate Maple Creek’s High School graduation with friends. Brady Dumontel and Denton Pridmore were on their way to a  party which would be the lead up to a branding on Saturday, June 30.

The best friends took the time to share their plans for life after High School. Both will be working on a ranch for the summer before heading to Vermillion College to study to become mechanics.

“A lot of people need a mechanic!” smiled Brady who, like his friend Denton is eighteen.

Brady has clearly already got some mechanic skills. He had to update, Shelly the Lincoln Town car.

“She was named for the woman I bought her from, Shelly Parker from Eastend.” said the young cowboy smiling. “I wanted something more classy, more comfortable,” Brady explained that he had previously been driving a 1994 GMC truck that he named Cinnamon.

Denton chuckled at his best friend’s account, and the two fellows got into their chariot.

“We’re well graduated,” added Brady before they drove away down Jasper Street into their future.