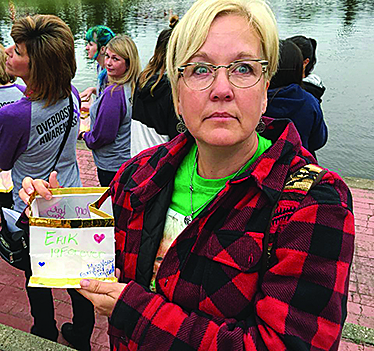 Rhonda Watt prepares to release a luminary in Erik's memory at Overdose Awareness Night in Leduc.

Rhonda Watt never would have considered her 19-year-old son Erik as an illicit drug user.

His life came to a tragically short end, but she and the rest of his family remain confused as to how things got this far.

“Over 100 people went to his memorial, many of whom I’d never met. He was just so loved. He’d want me to push forward and educate others about the dangers,” she said.

She now runs a blog dedicated to her daily thoughts, prayers and telling stories about her son.

Watt, who also works as a nurse with the Alberta Health Authority in Wetaskiwin, ensures people know the dangers associated with recreational drug use.

“This was an unnecessary loss. There was no reason for my son to die. This proves that it’s not always addicts dying. If you mess around and experiment, and your sample is laced or something else happens, you could have unimaginable consequences.”

Erik was a born and raised southwest boy, hailing from Shaunavon, SK. He was an athlete and good-natured soul.

“His dad and I split, and he lived with his dad for a while before he moved in with me. But he’s always loved his family,” she said.

“His godparents are in Maple Creek, and he would go visit his godmother Marg Barber and her partner, and just finish a work day on the rigs and drive down to watch a football game. Then he’d drive back.”

He leaves behind two transgender siblings, and two of his four siblings are mixed-race, which made Erik passionate and understanding of the need for diversity.

“His step-brother was a true, blue Saskatchewan rigger, and Erik joined him on the rigs. His step-sister loved to travel and was the love of his life,” she said.

“I knew he experimented, but I would only learn about how things changed on those rigs after he died. He expressed issues with anxiety and his mental health, and the racism and homophobia there hurt his soul.”

Between his inner turmoil and his disagreement with the narrow-minded views of co-workers, Erik would quite the rigs by the end of September 2017, just after his 19th birthday.

When he came home, his mother knew he was a marijuana user and was only happy it wasn’t anything worse.

“He was never really a big drinker. He had a few bad hangovers and learned his lessons that way. But when he got his license, I’d sometimes see him get up at 3 a.m., and he’d pick up stranded drunk friends and take them home,” she said.

“It just wasn’t for him. He used marijuana instead, as a way to relax, and while I didn’t want it in my house, I let him smoke outside when he came back from the rigs.” 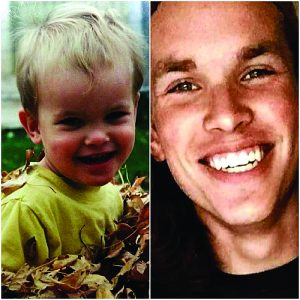 Erik Garthus died of a drug overdose last November. He was 19.

Erik came back with a plan in mind: he was one course short of his GED and was dead set on finishing. He wanted to get into construction, an area he had a passion for.

The Medical Examiner’s Report came out in June 2018 and showed Erik had cocaine and MDMA in his system at the time of his overdose in his parent’s basement. He was rushed to emergency, where he would pass on.

A talk with his four best friends a month after the Medical Examiner’s report illuminated some things for Watt.

“They all told me they’d done MDMA, and drank a ton of water, and partied hard and danced on the drug. I asked them how they knew it wasn’t laced, and after Erik, they’re going to think long and hard before taking other substances,” she said.

“We have the reason why he died, but none of us will ever know why he took those drugs that night. I got lucky, though, that his friends have become my lifeline. They showed up on Mother’s Day with a card, flowers, and we talked about Erik all day. They said I’d always be their mom too.”

Despite hearing her son’s future was dashed by drugs, Watt had desperately wanted to hear he had fentanyl in his system.

Saskatchewan had the highest rate of hospitalizations from opioid poisonings, according to a 2016 report from the Canadian Institute for Health Information, with 20.5 hospitalizations per 100,000 people.

Alberta Health indicated this year the high rates of fentanyl and fentanyl-laced deaths, stating 158 people passed due to opioid-related overdoses between Jan. 1 and Mar. 31, 2018.

“If it was fentanyl, I could blame someone else. I could say it wasn’t his fault, and his drugs must have been laced. But he took those drugs that night, and he made that choice that ended his own life,” Watt said, choking up.

“I need to speak out and tell the world about the terrible error my son made. I am on a mission, and I need other kids to think before they make these choices.”

She said the family is now left to struggle and try to make sense of Erik’s choice, and get along without him.

“He would be happy to know I’m getting this message out. He was so full of love. A medium I went to told me he’s holding me up, and he’s with me every step of the way. I believe wholeheartedly my message is his message,” she said.

“We need to educate and realize people who have died aren’t just addicts. They’re from every niche and demographic.”

She’s on a difficult, lonely road, but Watt knows people will be there to help her as she tries to spread her message.

“No woman should be left without her youngest child. It’s just not fair. He’s my inspiration. I am a mother to two other kids, and a nurse and the last thing I wanted was another big mission,” she said.

“But for him, I’d do anything that could help stop another mother from the pain of losing a child like this. I wake up missing him, I go to bed missing him, and there’s a little bit of him in everything I do during all that time in between each day.”