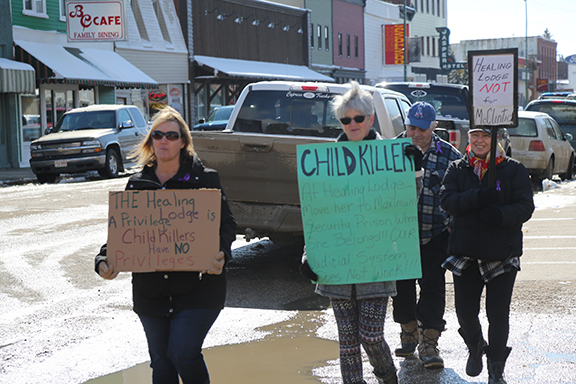 Karri Williams and Penny Steinkey are fed up.

What are they so upset about?

The two Maple Creek residents are mad at the fact that Terri Lynne McClintic is currently residing in a healing lodge just outside out town.

“I’m a resident of Maple Creek and I’m really, really angry about the transfer of this child killer out to the healing lodge,” said Williams. “We are quietly protesting and have been emailing the Prime Minister, Members of Parliament, and Corrections Canada as well. We’re going to be out here every single day until she is gone.”

Williams said although they’ve been writing letters, they haven’t got the response they had been hoping for.

“Yes, I got a lovely form letter from Ralph Goodale’s Assistant. I replied back and said ‘I don’t want a form letter, I don’t want a thank-you, I want McClintic moved.’ That’s what I want.”

Steinkey added that she was sick of complaining and wanted to do something about this McClintic issue.

“It’s very important that we do this because our healing lodge has a purpose. This woman does not belong there. She still has a minimum of 16 years left on her sentence. She should be doing hard time, not in a lodge. Let’s speak up. Letters aren’t helping. Let’s rally together and show support for the community.”

Williams finished by saying this:

“To anyone that hasn’t been to the healing lodge, it’s a beautiful place. It has a purpose for women that have been through horrific ordeals and need to better their life. Those women have the opportunity to get back out in the community and be good people. As far as I’m concerned, a child killer should be behind bars. She has free reign out there and no, we’re not happy about this. The Government better get off their asses and do something about it.”

In a statement issued earlier last week, Cypress Hills-Grasslands MP, David Anderson, had this to say:

“I’ve had calls from Maple Creek. Young mothers are telling me their kids play here. People at the lodge get day passes, and that concerns me. She should be moved back to where she was, and I’m going to stay on this until that happens.”

Anderson believes the government won’t reverse their decision until the public outcry is so strong that they have to.

For those unaware, McClintic is currently serving a sentence for murder, kidnapping, rape and the torture of eight-year-old Tori Stafford in Woodstock, Ont. in 2009. McClintic was moved in Dec. 2017.

McClintic must serve 25 years of her sentence before she is eligible for parole.

One response to “Residents outraged with McClintic transfer”