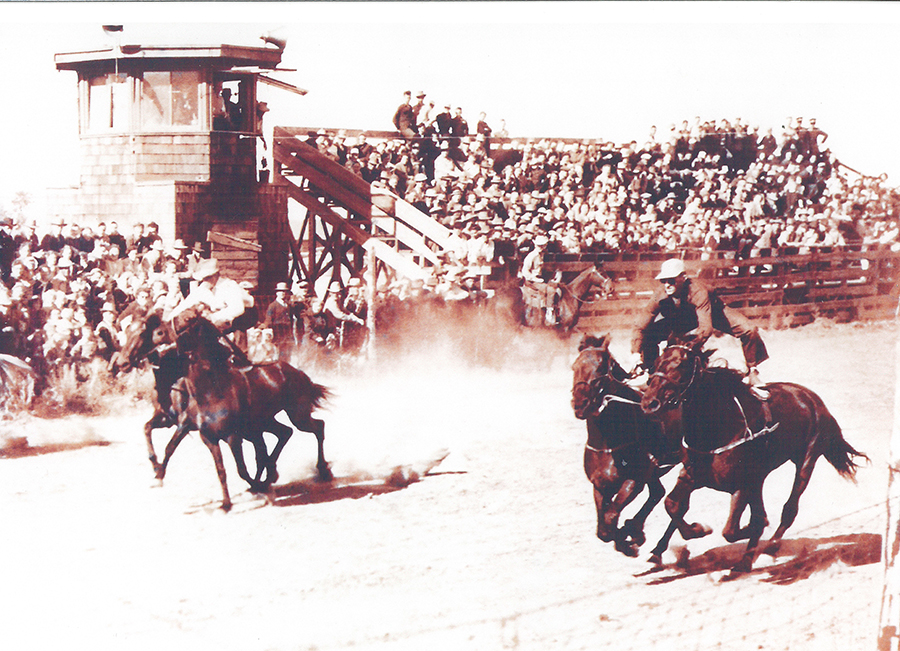 The community of Maple Creek was both shocked and saddened to hear the news that long-time area resident Reg Reznechenko recently passed away.

Reznechenko’s son Casey stopped by the news-office to talk about the passing of his father.

“I think the legacy he left behind was his love for horses and racing. He simply loved that lifestyle. He did it all including roman riding, relay and twenty mile racing and even chariot racing. He certainly followed in the steps of his dad who was also a big horse enthusiast.”

“He had a horse up until his late seventies and I would say he broke horses up into his sixties. That was simply the cowboy in him and the way he was. The breaking of horses that late in your life is pretty rough. Area residents know the trials and tribulations of breaking in a horse and the risks he was taking at his age.”

And because of Reg’s passion for horses, Casey’s fondest memories of his father certainly surrounded just that.

“The memories I recall best were definitely from the rodeo scene. He was a cowboy through and through and he loved both his horses and the rodeo. It was give and take though. We would follow him to his rodeos and he would do the same when it came to our sporting events as his kids. Not only did he enjoy watching, but he also helped coach us in hockey and baseball as well.”

Casey also recalled another fond memory that his father had shared with him.

“His dad was a big horse guy and my Uncle Jim told me they had hundreds of horses. They used to ride a three-day trip down across the border into Montana to bring back horses. Basically, it was a three-day adventure on horseback,” Casey chuckled.

“Yup, that’s the way they did it way back in the day. Definitely a different lifestyle than what we live today. They had to work a lot harder for what they wanted back then.”

Now one assumption you may have made about Reg to this point, was the fact that his number one love in life was horses. If that was your thought process, you’d be wrong.

“Both me and my brother were both adopted but I don’t remember much because I was young. Mom and Dad tried to have kids early in their marriage but they simply could not. From there, they decided adoption was the way to go and they adopted me in 1967 and my brother in 1972. From an early age, I certainly remember watching my dad change from a horse lover to a family lover. Horses then became his second love.”

And it was evident that not only did Reg have an impact on Casey’s life, but others within the community as well.

“To be honest, I put a note on Facebook that my dad had passed and I had over 200 comments on the thread. That right there told me exactly what people thought about my dad.”

One of those community members who will surely miss Reg was Casey’s Uncle, Jim Wilson.

“I’ve known Reg for as long as I can remember and my memory isn’t that good,” Wilson chuckled. “But in all seriousness, we were raised three-miles apart out on the farm. So what the hell, he was 88? I don’t remember much before 7 and I’m 85 now, so I guess I knew Reg for 78 years. That’s a hell of a long time isn’t it?”

When asked how Wilson would describe Reg, he had this to say:

“I just don’t know how the hell i’d put that,” he laughed. “He was a good little guy and an honest little fella, that sort of deal. He worked for me for a number of years and he was a great little worker. He certainly knew what he was doing.”

And from the earlier interview, Wilson echoed Casey’s comments on Reg’s passion for the rodeo life.

“He loved his horses and his dad did too, he certainly followed in his fathers footsteps. He was a great horsemen eh? He ran a lot of races in his day and loved the rodeo. He would run the chariot and relay races and then the roman race as well. Those roman races are something difficult. That’s the one where a guy stands on two horses. I only knew three guys in town that could do that and Reg was one of them.”

Now over 78 years, one would have to believe that Jim and Reg collected a few memories.

“There were definitely some things that happened over the years but nothing that I can recall too cleanly, you know what I mean?”

And basically as soon as Wilson said he had no stories, the wheels started turning.

“He was always full of tricks when he was young you know. He loved teasing his mother as a kid. One time he was out at the farm and they had a decent sized house. Within the home they had a trap door. One afternoon just after lunch, his mother was laying on the bed there just resting and he opened this trap door.”

And this is where the story took a turn for the hilarious.

“Meanwhile, he heard a plane flying overhead. At this time, he’s only eleven-years-old so he rushed outside to see it. When he came back, he had a notion that he was going to close his eyes and walk across the room to touch his mother without running into anything. Little did he know, he forgot the cellar door was open. His mother saw this but knew he was so full of tricks that she was sure he was pulling another stunt. He then came along and as quickly as he ran outside to see that plane, there he went down into the cellar,” Wilson howled in laughter. “And the trick was on him.”

Wilson said the memory of Reg would certainly live on in his mind.

“Pretty good little guy. He won a lot of races and won a lot of trophies. He also worked in the pastures, worked for me, worked for the commercial hotel and drove school-bus until he was 65. That’s what he did, kept busy. He just did his own thing and enjoyed life in his own quiet little way.”

A funeral service for Reg will be held Friday, Nov. 2 at 2:00 p.m at the Maple Creek United Church.

In memory of Reg, donations may be made to the Southwest Healthcare Trust Fund through the Cypress Credit Union or Telemiracle.