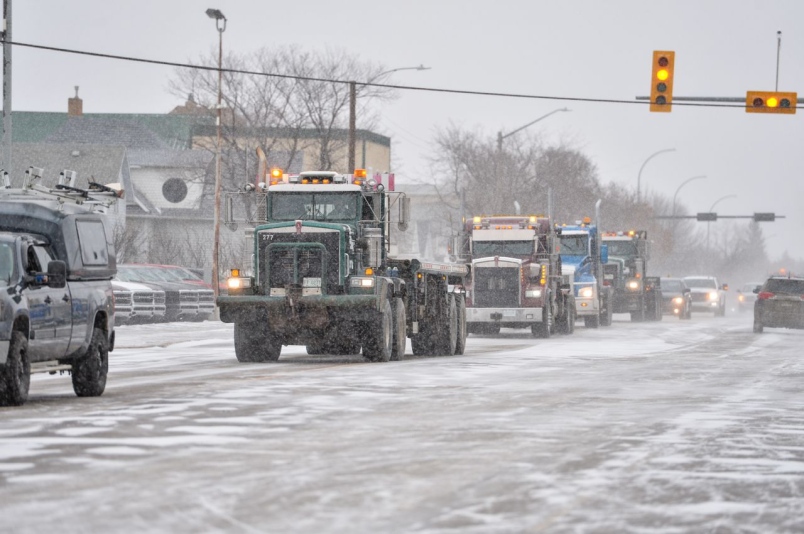 TRUCKS TO PASS NEAR MAPLE CREEK – PROTESTORS TO MEET OFF HIGHWAY

Let’s get ready to rumble …

The United We Roll Convoy for Canada was set to hit the road today – with Maple Creek playing a part in the action.

At 8am, trucks were expected to begin rolling across Western Canada on a 3,000-kilometre journey, sending a message to Prime Minister Justin Trudeau: we need pipelines.

The starting point is Red Deer, Alberta, the destination is Parliament Hill, Ottawa.

In between, the route will take in Highway 1, Saskatchewan, skirting the Maple Creek area; it is thought units will pass by at about 3.30pm today.

One of those planning to go to the highway to show support is Rhoda Mott, who lives and works in Maple Creek.

She has been using social media to encourage local people to join her at the Visitor Centre this afternoon.

“I’ve put a message on Facebook and a few people are saying they are going to be there,” she said on Tuesday.

“We plan to make signs and make it known that we support what is happening.”

Mott said she used to work in the oil and gas industry near Fort McMurray, but that wasn’t why she backed the convoy.

“I believe we need the pipeline built,” she said. “It affects Maple Creek. Lots of people in the area are in oil and gas, and they could be out of work soon unless there is a pipeline.”

“Everybody is really pumped up and ready to go,” he said.

The convoy of several hundred vehicles was expected to start this morning at Gorts Truck Wash, Red Deer, before passing Strathmore and Brooks. Weather permitting it should roll through Medicine Hat at around 1 or 2 in the afternoon.

It will then cross into Saskatchewan on Highway 1, before hitting Gull Lake at 5pm. From there it will move to Swift Current and arrive in Regina at about 9pm.

Blocks of hotel rooms have been set aside for truckers.

Here is the rest of the itinerary:

Arnprior is about 50 kilometres from downtown Ottawa and Parliament Hill.

February 18 is a “day of grace”, accounting for possible weather delays.

The next day, Tuesday, will see the convoy will roll out of Anrprior, now Highway 417, and park near Parliament Hill.

There will be speeches from 11am and the rally will continue until 4pm.

Those who cannot commit to the entire journey are encouraged to join the convoy for as long as they are able.

Caritt says the point of the convoy is to protest bills C-48 and C-69, as well as the carbon tax, which he believes needs to be scrapped or revisited.

Bill C-48, the Oil Tanker Moratorium Act, would ban tankers carrying more than 12,500 tonnes (about 90,000 barrels) of crude oil or persistent oils (such as fuel oils, partly upgraded bitumen, synthetic crude oils and No. 6 bunker fuel) from stopping, loading and unloading at any ports along B.C.’s north cost.

Bill C-69 would create a new Impact Assessment Agency and replace the National Energy Board with the Canadian Energy Regulator. It introduces new timelines and specific steps that companies and governments will have to take in order for new energy projects to go ahead.