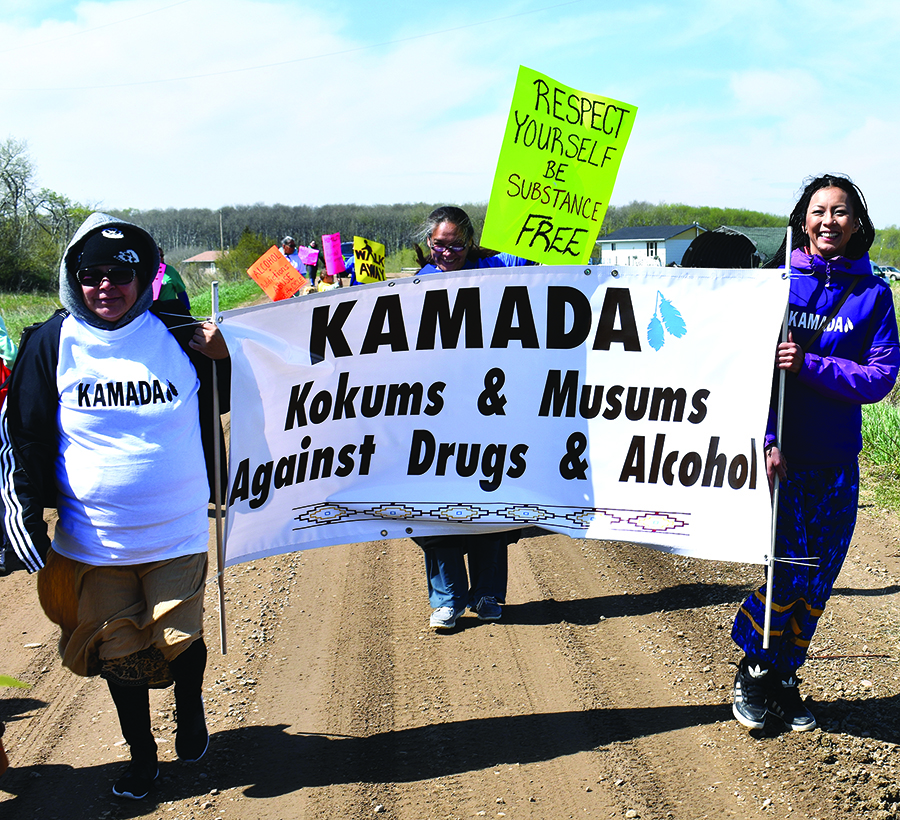 For about two hours they trudged over stones, grit, mud and dust, carrying placards around their reserve and spreading a message of love and hope.

The signs bore stark words, reflecting the scourge of drugs and alcohol that has claimed the lives of so many Indigenous people.

“DEAD, Drugs end all dreams”, proclaimed one. Others said “Say no to METH”, “Alcohol & Addictions Abuse, Break the Cycle”, “Live Smart, Live Long, Don’t Do Drugs and Live Strong”, “Respect Yourself be Substance Free”, and “Signs and Symptoms of Substance Abuse, poor academic performance, trouble with the law.”

The big problem blighting Indigenous communities is crystal meth, a strong and highly addictive drug that affects the central nervous system. Death from overdoses and high crime are being linked to this drug.

About 30 people, many of them children, took part in the “Kokoms And Mosoms” walk Against Drugs and Alcohol (KAMADA).

The main organizer was Alice Pahtayken, a former Nekaneet chief, who knows first-hand the horrors of addiction.

“We want to support our young people,” she said.

After a pipe ceremony at the Upper Camp, people set out on a 10-kilometre route, which involved making a loop at the Lower Camp before heading back towards the school, now the band office, where they enjoyed a meal.

Shannon Sasakamoose and Patsy Buffalocalf had prepared everything from bannock, hotdogs and salads to water melon, bananas, and desserts.

It was then time for speeches, before heading home.

One of the speakers was Mary Rose Naytowhow, who hails originally from Sturgeon Lake, and founded the KAMADA walk in 2004.

The inaugural one took place in Sturgeon Lake.

Since then there have been different hosts each year. The last one in Maple Creek was in 2010.

Naytowhow told the News-Times that she had hit on the idea of a walk after her late brother-in-law spoke about losing family members to addiction.

“I wanted to try to help by raising awareness,” she said. “The big problem is Meth. It is killing our people. We are losing young people and are in a crisis situation.

“It is not just the Nekaneet First Nation. It is right across the country. Whole families are being wiped out by drugs and unfortunately the waiting period for treatment centres is anything from a month to three months. The system isn’t working. We are lucky if we save two out of 20 people.”

Naytowhow said there were efforts to unite bands across Saskatchewan and Alberta in tackling the deep-rooted problem and creating healthy communities.

She added that as caregivers, the kokoms and mosoms had taken on the responsibility of attempting to change the lives of young people.

“We are trying to teach knowledge and the wisdom of choosing a healthy lifestyle.”

Naytowhow blamed Canada’s discredited residential-school system, which tore Indigenous children from their families, for a big part of the problem. She also said youths felt isolated and confined on reservations.

“We see young people turning to the cities and getting involved in gangs,” she said. “There is nothing in the cities for them. What we want to do is build healthier, safer communities and unite all First Nations bands.”