Residential schools: a legacy of trauma 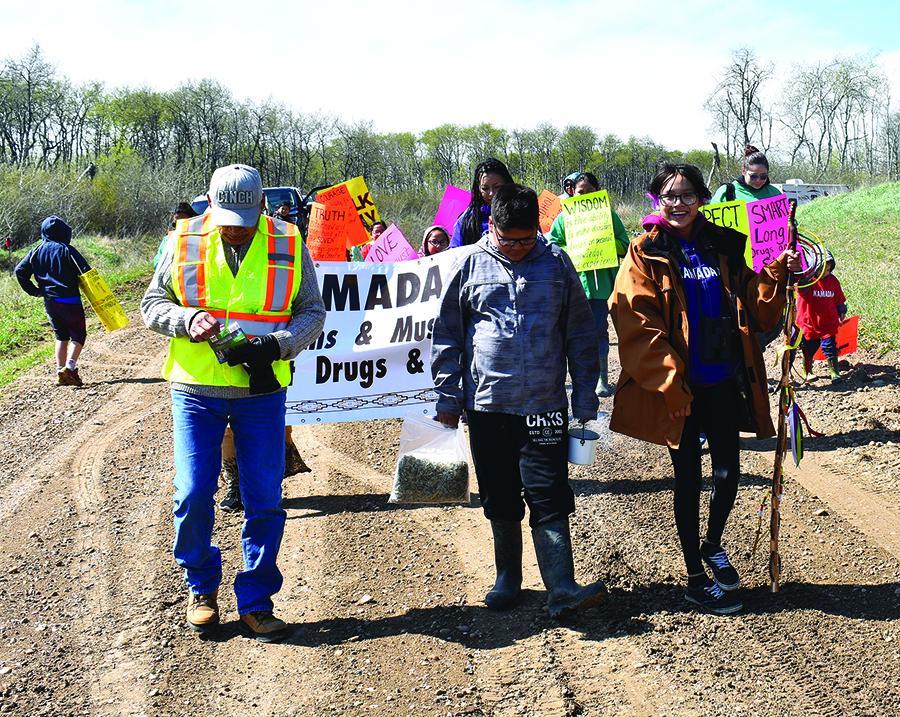 On Sunday, the Nekaneet First Nation community held a walk to raise awareness about substance abuse. Among the 30 who took part was Roger Pahtayken. A fluent Cree speaker, and former long-time Cypress Hills Park employee, he spoke about the horrors of residential school.

With a balled fist, Roger Pahtayken beats the left side of his chest.

“I get upset when I start talking about it,” he said. “There is still a lot of anger and pain in here.”

We are talking about residential schools, a form of cultural genocide that started in the 1880s and lasted into the closing decades of the 20th Century. It was a crime fuelled by breathtaking arrogance.

I didn’t know much about it on Sunday, but, since talking to Pahtayken, I’ve read historical accounts and listened to survivors’ stories. I wanted to watch the movie Indian Horse, as he recommended, but couldn’t find it online.

Survivors’ testimonies mirrored what Pahtayken told me about his own experience at residential school in Onion Lake, Saskatchewan, in the early 1960s.

He was 7 or 8 when he went there, forcibly separated from his family and community. His braids were shorn off and he was forbidden from acknowledging his Aboriginal heritage and culture, and speaking Cree – the essence of his identity.

Violations of these rules, or any others, were harshly punished. Nuns would strap him or force him to kneel on pencils.

Like many other former students, Pahtayken recalled enduring physical, sexual, emotional and psychological abuse. He was subjected to brainwashing, he said, in a system that sought to indoctrinate Aboriginal children into Euro-Canadian and Christian ways of living and assimilate them into mainstream Canadian society. Such abuses, along with overcrowding, poor sanitation and inadequate food and health care, resulted in a high death toll in residential schools.

“We had no voice there,” Pahtayken recalled. “They tried to beat the Indian out of the child. It got so bad that I would ask God, why did He let this happen.”

When Pahtayken left the school, he was burning with anger and resentment.

“By the age of 15 or 16 I could not wait to start drinking,” he said. “When I was drinking I would want to fight. I would fight anyone.”

It is hard to match these words with the calm, gentle, dignified man before me. He must have caught a trace of scepticism in my eyes.

“Seriously, you wouldn’t have wanted to be around me when I was drunk,” he said.

He showed me the fists through which so much youthful angst had been channelled. I’m sure I saw a few battle scars.

“I developed an alcohol problem and it was only when my first grandchild was born that I decided to stop my drinking,” he said.

It is a wonder that Pahtayken succeeded in getting to grips with his demons, for being removed as a boy from his family meant he grew up deprived of nurturing and without knowledge of parenting.

Many former residential-school students have been badly damaged by a childhood of suppressed identity, devoid of role models.

In addition, there is intergenerational trauma, said Pahtayken, with descendants of residential-school survivors sharing the same burden as their ancestors – compromised family units, loss of Aboriginal language and culture. This devastating legacy was a recurring theme during my conversations with Nekaneet members.

“If you watch the movie Indian Horse you will understand what we went through,” said Pahtayken.

It is easy to see why Sunday’s walk against drugs and alcohol was so personal for him. For much of the walk he appeared deep in thought. His wife, Alice, inched along in her vehicle behind the group.

Normally she would have walked in front with a healing stick, but injuries from a road accident forced her to yield that responsibility to grand-daughter, Charisma. Occasionally Pahtayken would lay tobacco on a grass verge – an offering to the spirit world in the hope of creating a healthy community.

“It’s all about helping our young people, our children – they are the future,” he said.

Now in his early 60s, Pahtayken has been on a life’s journey beyond the understanding of outsiders. Thankfully, he appears to be in a good place now. From 1979 to 2011 he was a maintenance man at the Cypress Hills Interprovincial Park, and he still likes to keep busy, perhaps partly to keep those demons at bay. He doesn’t mind talking about the past, even if it makes him agitated. In fact, he needs to talk … as a form of therapy. Bottled-up emotions, he believes, can lead to health issues, even cancer.

“It’s good to release the anger and pain,” he said. “I’m also full of forgiveness now. I can forgive, but I can never forget.”