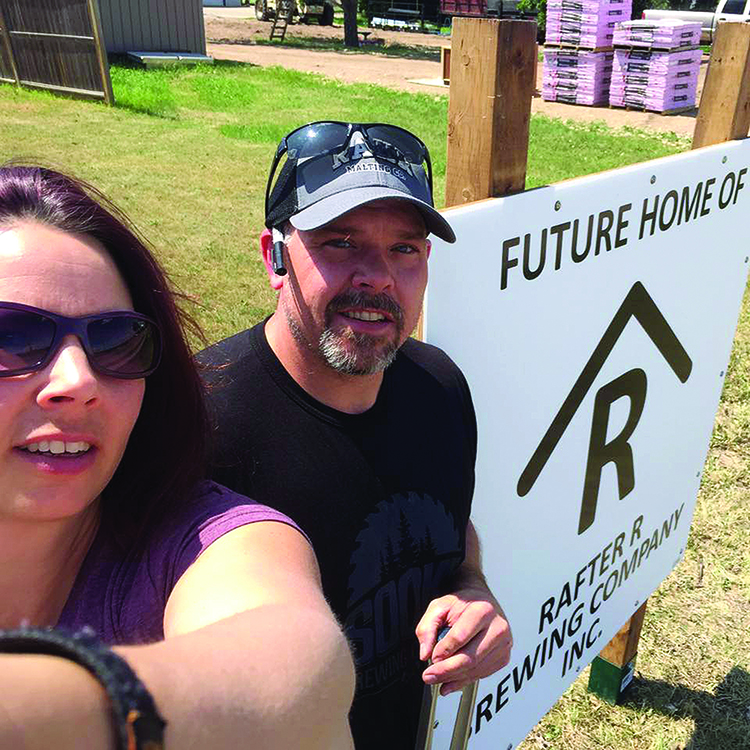 Couple planning to relocate to Maple Creek from Alberta

The couple have decided to move here from Alberta and run a small brewery at the corner of Pacific Avenue and Aspen Street.

They recently signalled their intent by putting up a sign at the vacant lot. It reads “Future Home of Rafter R Brewing Company Inc.”

“I’m chomping at the bit,” said father-of-four Ryan last Thursday. “I can’t wait to get going.”

The idea is to construct a 40ft by 40ft building that will have two main sections: a brewery at the back, and a taproom at front, where people can sit and sample high-quality beer. Light snacks should be available, although customers will be able to bring their own food into the premises. Just imagine that – enjoying a local brew with your pizza.

As for the beer, Ryan intends selling a wide selection suited for all tastes.

“I want to brew pretty much anything,” he said. “From mild to wild.”

He will be applying the skills he has learned during five years at Ribstone Creek Brewery in Edgerton, east central Alberta. For the last three and a half years he has been head brewer, playing a key role in producing award-winning beer.

The Moncrieffs are still in the planning stages of their big venture.

They have to sort out financing, draw up building plans, and, of course, get the required licensing. If everything falls into place the way they hope, ground could be broken this fall.

“If that happens, then fingers crossed, we should be making beer by next summer,” said Ryan.

The couple’s dream began to take shape last summer after they left their home in the village of Chauvin, Alberta, to spend a week’s vacation in Maple Creek; their visit coincided with the Heritage Festival.

They rented a place near the Grotto Gardens Country Market, and spent their time enjoying the Heritage festivities, meeting friendly folk and admiring the views in the Cypress Hills.

“We absolutely fell in love with the community and thought it would be a great place for our family to live,” said Ryan.

Their love for Maple Creek and its western culture is partly explained by their childhoods; both come from cattle-and-grain backgrounds imbued with the spirit of cowboys and cowgirls.

Ryan was raised in Senlac, a small Saskatchewan village with a population of just 41, according to the 2016 Census.

“I know all about small town living,” said Ryan. “I’m no stranger to ranching and farming.”

Although he was on holiday, Ryan’s business antennae were working full-time last year. He liked the blend of different businesses in the downtown core and he could appreciate the huge potential for summer tourism. It was easy to imagine a brewery thriving in such an environment.

After agreeing to relocate, the couple scouted for a business location. They asked themselves a key question: was it better to convert an existing property or begin building from scratch?

“We decided it made as much economic sense to construct our own building,” said Ryan.

The site off Pacific Avenue, which has commercial frontage, met their requirements, providing space for business growth. The house that used to sit there was demolished after the 2010 flood. Since then the land has been empty.

In November, 2018, Maple Creek Town Council received a letter from the Moncrieffs expressing their interest in setting up a brewery in the town.

Now that their interest has turned into a concrete plan, and they have bought land, the couple intend meeting the Town Council and the Maple Creek Chamber of Commerce, which has already posted on its Facebook page a photograph of the Rafter sign at the site.

Ryan believes he has found his vocation in the brewery industry.

Before entering it, he had tried his hand at different jobs, but they never felt right.

He worked in the oil field, earning great money, but grew tired of the “crazy” hours and being separated from his family.

Working on CN railroads proved worse – great money again, but even less family time. When the opportunity to work at Ribstone Creek Brewery came up, he jumped at it.

“I’ve home-brewed for a bunch of years and always enjoyed it,” he said. “I knew that if I didn’t throw my hat in the ring I would always regret it. Well, I’ve been there five years and haven’t regretted it.”

The Ribstone Creek Brewery operation is much bigger than the one he has in mind for Maple Creek, which will fall into the category of a craft brewery or perhaps microbrewery. The hope is to produce a few hundred hectolitres annually, although it is too soon to come up with specific figures.

“To begin with, just my wife and I will run the brewery,” said Ryan. “Hopefully, if we expand we will take on some employees. Our aim is to make extremely high quality beer. At this stage we are not looking at much in the way of distribution across the province. It will be local beer.”

Why the name Rafter R Brewing?

After kicking around a few ideas, they settled on a name that honours their ranching roots. Ryan’s great-grandfather, who came to Canada from England, had a cattle brand named Rafter.

Of course, the brewery venture presents the Moncrieffs with another challenge: finding a house big enough to accommodate their four children: Avery, 16, Holden, 14, Lily 12 and Olivia, 10.

For Ryan, it is all part of the exciting new chapter in their lives.

“We can’t wait to get started in Maple Creek,” he said.