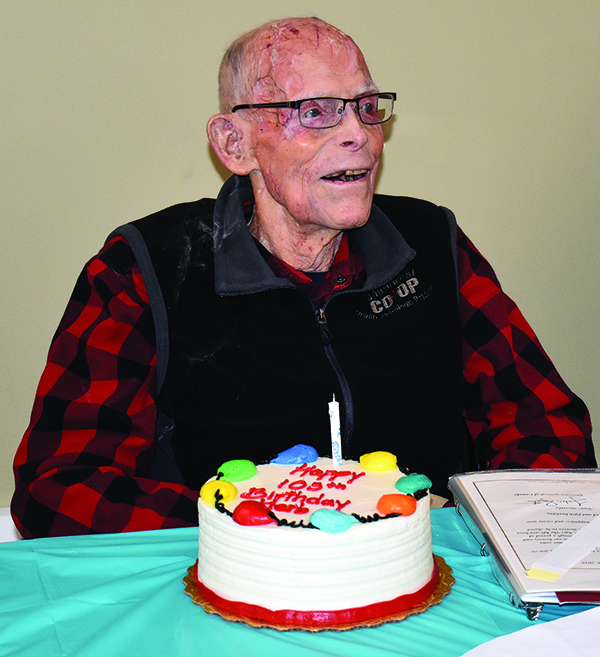 Without appearing to draw breath, Herb Duncan leant forward and blew out the candle in the birthday cake before him.

The whole of Maple Creek, or so it seemed, gave him a thundering ovation. There was clapping, applause and cheers.

Herb looked up and smiled as if to say: “Did anyone seriously doubt whether I could do it?”

On the table before him, next to the cake, was a sheaf of congratulatory messages from dignitaries, among them a letter from the Queen, sending her “warmest congratulations on this happy occasion and good wishes for an enjoyable day.”

It was indeed a happy day – and one that everyone who knows Herb wanted to be a part of; after all, 105 years of birthdays is something extra-special to celebrate.

At least 100 people filled Cypress Lodge to congratulate Herb on his amazing milestone and show their love, respect and admiration for someone who has given so much to the community.

Coming from far and near, they included his children Larry, Darrell, Neil and Lynanne, grandchildren, great-grandchildren and nieces.

Before a candle had been lit, or a slice of cake eaten, queues formed to say a few words to the man of the moment who appeared immaculately dressed in a black and plaid red shirt, with a sleeveless black Co-op shirt.

“He has been looking forward to this party for at least a month,” said Darrell, the middle son, who, like Larry and Lynanne, came from Calgary for the occasion. Neil made an even longer journey – from Vernon. British Columbia.

Darrell spoke of his pride for his father, who taught his children so much about life, and passed on his mechanical skills, including the use of machinery.

After Darrell had addressed the group of well-wishers, speaking about how the world has changed since his father’s childhood, he asked five great-grandchildren – Kieren, Ayla, Brett, Connor and Alvin – to take their positions for lighting the birthday cakes.

Already seated at the piano was Hazel Foster, another member of Cypress Lodge’s centennial club.

Her fingers contradicted her 106 years as they danced over the keys and even did a glissando to end the song.

Then came the traditional highlight of any birthday party – passing out the cake and ice cream.

So did “Dad” enjoy the party?

The smile illuminating his face told everyone the answer.

Leaning forward, Herb whispered to the News-Times: “I want to try to play my fiddle again – to see if I can still do it.”

As everyone who knows Herb will testify, the man could play a mean fiddle in his day.