Mayor: alarm could have been avoided 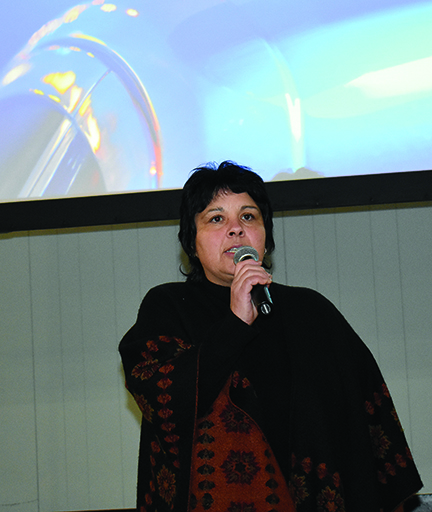 For Michelle McKenzie, much of the anxiety over possible changes to policing in the Maple Creek area could have been avoided.

She said they should have contacted municipalities earlier in the process to allow a rational public debate on the issues.

Instead, by not being more upfront, they had caused alarm in the community.

McKenzie spoke after attending last Wednesday’s meeting about the RCMP/MNP study on the present policing model in the Cypress Region, which includes Swift Current (rural), Gravelbourg, Leader, Maple Creek, Morse, Ponteix, and Shaunavon.
Similar town hall meetings have been held in other communities.

As many as 430 people showed up at the Armoury where they heard Regina-based Supt. Kunetzki, District Officer, South District Management Team, and MNP partner Chad Lins talk about the review and field questions.

Kunetzki spoke about his concept of a super-hub policing model for the Swift Current region, saying the aim was to improve service and provide flexibility for managing staffing needs.

McKenzie questioned why Supt. Kunetzki and MNP had waited so long to hold consultation meetings.

“All they did to my community was to cause panic and pandemonium. If they had four questions that they wanted answering, why did they not give those to the municipalities and have them answered in a rational way? Right now, nobody is talking rationally.”

McKenzie, who has attended meetings in other communities, said she kept hearing terms like “pooling resources” and “deployment models”, but without any explanation of what they meant.

McKenzie said she hoped people in Maple Creek could “see between the lines.”

“What I want to know is how does he see the model of policing. How does he see it? Give me an example for it. What are the flexible options that he sees? What are these examples? Tell me. If you wrote the proposal for this, you had to have a vision. How is this operational? I’ve asked these questions and get non-answers.

“Other people are asking the same questions. The crowd asked those questions in a roundabout way. He put up a smokescreen. There is no trust. I wanted the public to have their voice heard. How do you trust somebody when they already did what they did?”

McKenzie also said Kunetzki had not shed light on his super-hub concept.

At the meeting, she added, Kunetzki had appeared to distance himself from it, saying “super-hub” was just a term he came up with. However, in the RCMP notice about the town hall meeting, the super-hub had a specific name: Cypress Regional Detachment.