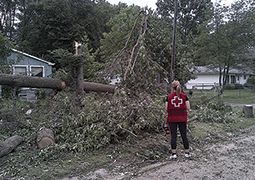 As parts of Saskatchewan, including Maple Creek and area, are right in the heart of tornado season, the Canadian Red Cross can offer valuable information.
Georgiana Schuring, operations manager, emergency management, Canadian Red Cross Saskatchewan, said planning is one of the most important things to do.
“As a family or as a household, that people get together and make a plan,” Schuring said.
One scenario a family or members of a household can plan for is if somebody is at home and/or somebody is at work what will happen and where do family members meet up.
Another planning consideration would be where is the safest place in a home? Is it in the basement? Or if in an apartment, is it in a stairwell?
“It’s consideration of everybody in the household. If you have an emergency kit do you have enough food in there for 72 hours? Do you have those emergency phone numbers you might need? Have you got food for the pet in the house? Do you have extra prescriptions on-hand, so you could last for 72 hours? Those are the first considerations for people to think about,” Schuring explained.
If away from the home or in a vehicle, Schuring continued, it’s about looking around for a solidly-built building to shelter in or it might have to be a ditch and get as low to the ground, as possible.
“Plans are great, but unless everybody in the household and family knows what the plan is, it’s not going to work.”
According to Schuring, a tornado watch is a possibility of a tornado. “There’s a storm happening that could have a tornado occurring in it.”
With a watch, listen to the radio and watch the skies to see what is happening.
With a tornado warning, Schuring added, a tornado is already occurring. “It’s already in your vicinity.”
With a warning, take cover immediately.
Schuring said at home, it’s best for household members to get as low as possible.
“If there’s a basement in the house, go into the basement. You should really be on the wall to which you think the tornado is coming towards you. That’s not always possible. If you don’t have a basement, it will be that interior room, especially a bathroom because they tend to be on the inside of houses without windows,” Schuring pointed out.
Again, if in an apartment, the stairwell is the best place to seek cover. “It’s the middle of the building you want to be in,” said Schuring.
“It’s the safest place.”
Most people have technology, these days — Schuring noted.
“I really advise them to have the SaskAlert app. If you have it with the warning turned on it makes a wonderful honking noise when there’s a warning happening in your region,” joked Schuring.
To learn how to make a plan and emergency kit visit redcross.ca online.
According to Schuring, one of the most important items in an emergency kit is water and food. “You need two litres of water per person per day and don’t forget the pets.”
Non-perishable food preferably, is next on the emergency kit list for must-have items.
Remember to pack formula or other special needs items. Make sure an emergency kit also has a first aid kit and a battery-operated or crank radio.
“Then after the emergency you will be able to listen to your local news and follow instructions of what the authorities are advising,” Schuring said.
Personal hygiene items in an emergency kit are also deemed essential, as well as a cellphone charger.
Victims of a tornado or other disaster can reach out to the Canadian Red Cross for support at 1-888-800-6493.
Support is on a need basis, Schuring said.
“Typically, if a home has been unfortunately destroyed, we’d be putting them up for three days with Personal Disaster Assistance and we would make sure they had commercial lodging ­— if they didn’t have friends or family they could go to. And we would make sure they have food and if they needed clothing, we could also do emergency clothing.
“And then we link them with other support. Making sure, after those 72 hours, they have somewhere to go and they know they’ll be supported,” said Schuring.