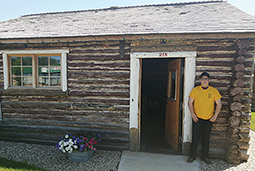 Maple Creek’s South West Saskatchewan Oldtimers’ Museum, located on historic Jasper Street, is once again open for the summer season, after a delayed start due to the COVID-19 pandemic and its provincial government-imposed regulations to keep museum-goers and staff safe.
With the province’s second part of its Phase 4 reopening plan — libraries, museums, galleries, movie theatres, and live theatres in Saskatchewan were able to reopen recently.
Dedicated to the memory of the frontier period in the history of the Cypress Hills, the museum was established in 1926.
Today, the museum is divided between the 1935 Log Museum at 218 Jasper Street (believed to be the oldest purpose-built museum building in Saskatchewan) and the C.M. Glascock Building at 222 Jasper Street (which originally operated as an automobile dealership from 1909 to 2009), according to the Town of Maple Creek’s website.
A summer student at the museum, Brawly Scribner and a co-worker take care of sales, maintenance, and make sure everything is clean and sanitized, in the role of museum assistants. The summer of 2020 marks Scribner’s first year in the role, which he began May 11. The museum reopened July 7.
“There were more people than I expected to come in,” Scribner said, this past Thursday.
With the reopening, visitors at this time will need to ask museum assistants to use the washroom, which will be sanitized afterwards, and sanitization stations are in place for guests.
Betty Abbott is the president of the association and museum.
“We don’t typically see swarms of people through there, but they’ll limit the number of people indoors,” Abbott pointed out.
Displays are generally not really touched by guests typically, as most of the artifacts are behind glass, for the most part.
“We’re pretty well set up that way,” said Abbott.
According to Abbott, the museum’s mandate is to tell the tale of the humble beginnings of Maple Creek and the town, as it moves forward.
“Primarily, the First Nations and Fort Walsh and how they kind of came to be. And the Western heritage and things like that,” Abbott explained.
A focus is on the early days of the town, but there’s also some more recent things to remain relevant and involved in the community, Abbott said.
“We have some nice First Nations exhibits, which we really appreciate and we really enjoy working with them and have them be involved,” said Abbott.
Abbott said there is also hope the museum’s gift shop will be bigger and better in the years to come. “We’re looking for local artisans to provide some things, so we can sell local art and crafts from our museum.”
Currently, the museum is open Tuesdays through Saturdays. Admission is by donation.
Abbott noted the museum is a non-profit organization, therefore relies on funds through fundraising initiatives, which were cut because of the pandemic.
“We have to do things to pay for the heat and power and that. Normally, the long weekend in May, we have a garage sale — which brings in a fair amount of money for us. But, we weren’t able to have that,” Abbott said.
Ticket sales for the museum’s annual “Trip of the Month” draw are also down, Abbott added. “That is something we’ve been doing to raise funds for the building and have raised quite a bit that way.”
Typically, the museum is open for the season from the long weekend in May until just after the long weekend in September.